Intel Thunderbolt 3 is a single port connect that supports multiple standards (Thunderbolt, USB 3.1, DisplayPort, PCIe), leverages USB-C connector, and offers up to 40 Gbps throughput. So far, it’s mostly found in higher end computers and laptops, but Intel has now announced plans to make it royalty-free, and “release the  specifications to the industry” (so maybe not completely free/public) in order to increase adoption of the standard. 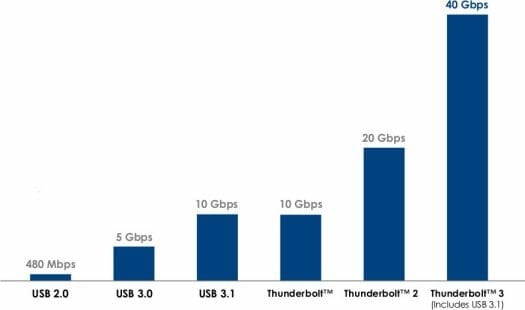 That means eventually we may get devices with a single Thunderbolt/USB-C like smartphones to connect all peripherals including 4K displays,  NVMe SSDs, Ethernet, external GPU, etc.., and power/charge the device though a Thunderbolt 3 dock, which can be purchased for $200 and up. One example is StarTech.com Thunderbolt 3 Docking Station with 4K display, Ethernet, Audio and USB ports going for $199.99 on Amazon US. 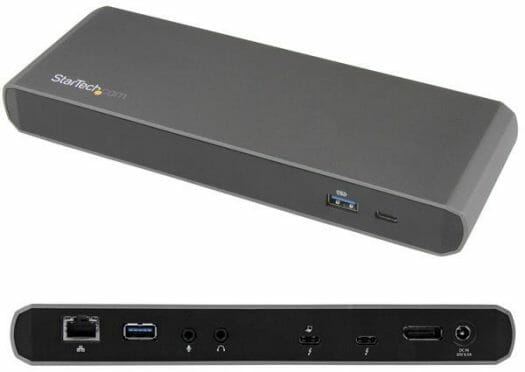 Hopefully this would end the type c chaos.

This’ll have other benefits, for instance TB3’s 40gbit is hard to reach at the moment due to the PCI-E lanes not being directly fed off the CPU, rather through some intermediary circuitry. Put TB3 on the CPU and with a bit of luck you’ll be able to get full speed and hotplug ability.

Unlikely, as Thunderbolt cables are more complex, can’t be as long and cost a lot more. It’s not a 1-1 replacement for USB-C.

At least vendors have a way of describe what one version of type C to a customer.

I bought a laptop this year with a type C and there’s not indication what it does. 4 months the manufacturer added to their FAQ that it’s USB 3 SS gen1 with [email protected] power output.

Now vendors have a title to market type C as, in stead of plain “type C”.

dx :
Hopefully this would end the type c chaos.

This would require that consumers (and reviewers) start to understand/mention that USB-C is not even related to USB3. And this will never happen.

We can only hope that USB-C will be widely adopted and crappy USB-C implementations (used as 5V power input only for example) disappear so the connector itself will not be mentioned any more. Then it will get easy since people start to talk about either USB3 or TB3 and/or the alternate modes (DisplayPort and so on).

@Jean-Luc Aufranc (CNXSoft) These profiles exist and also logos exist to clearly mark what’s possible: https://en.wikipedia.org/wiki/USB-C#Alternate_Mode_partner_specifications And then other logos exist that specify the speed (SuperSpeed vs. SuperSpeed Plus) and whether cable and jack are compliant to latest power delivery specs or not (the USB logo then turns into a battery symbol). See picture at the bottom of https://www.heise.de/newsticker/meldung/Viele-neue-Logos-fuer-universelle-USB-Buchsen-2792355.html Of course there are multiple problems with these logos (starts with the symbols: ‘SS’ for SuperSpeed for example, adding an insanely small ’10’ somewhere when it’s about ‘SuperSpeed Plus’ instead) and market/consumers are used to incorrectly used USB version numbers anyway.… Read more »

@zoobab
LOL, calling such a Dock a ‘converter’ is a nice joke (you obviously didn’t look into how signals from one TB3 cable could be converted to/from the various other connectors? 😉 )

BTW: Startech’s Dock is missing charging capabilities for a connected MacBook (Pro) so the Belkin TB3 Dock is most probably a better choice here.

@Jean-Luc Aufranc (CNXSoft) BTW: I believe you’re wrong claiming ‘Intel … wants to make [Thunderbolt] royalty-free’ since this would mean they charge current TB adopters today which AFAIK is not true. Intel’s announcement talks about making ‘the Thunderbolt protocol specification available to the industry under a nonexclusive, royalty-free license’. Today such license is not available and you’re tied to Intel for both host and device support (you need any of these TB controller chips on each side of a TB cable + the ‘cable conditioners’ inside the cable plugs), tomorrow we might see TB3 not only in new Intel CPUs… Read more »