If you are young enough, you may never have heard about floppy disks. They were the equivalent of “micro SD card” in the 1970’s to 2000’s , in the sense they were portable mass storage device, but the comparison stops there, as the size and capacity were quite different, and they relied on magnetic storage technology. The first 8-inch floppy drives appeared in 1971/1972 and the best models could eventually store 1.2 MB, they were following by 5¼-inch drives later the same decade with 360KB being the most common capacity, and finally 3.5-inch floppy drives coming with either 720 KB or 1.44 MB capacity in the 80’s. The latter were used until the early 2000’s, and I can remember Windows 3.1 being sold with 7 or so floppy drives. They were eventually replaced by CD ROMs, and USB flash drives. I’m writing about this, because I found out that Aliexpress is selling USB floppy disk drives for just under $10 shipped. 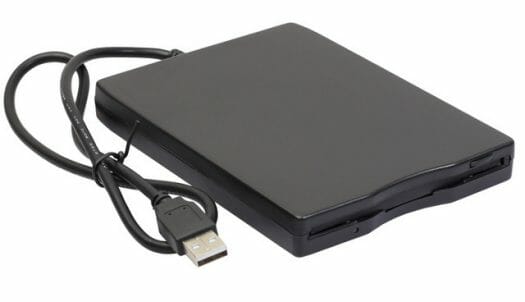 If you have working 3.5″ floppy disk drives in 2017, I congratulate you, as I remember backups on floppy drives would not last that long, with data becoming corrupted after a few years. I could not find drives for the older and larger floppy drives. Those larger floppy drives (aka diskettes) are still in use however, and our lives may depend on them, as part of the US nuclear arsenal still rely on 8″ floppy drives.

As a side note, I also discovered today that Aliexpress worked again with PayPal, and they offer a $5 coupon to new users using PayPal. It may only be available in some countries, as I don’t have the option to pay by PayPal yet in Aliexpress.

Thanks to Bruce for the tip.

Corrupted after a few years? I can still the read/write the 5.25″ floppies for my Commodore64 from around 1985. I know data density is low (170 kilobyte per side) for these disks, but it’s reliable for sure. My first own recorded CD-ROMS lasted way shorter!

Also my 3.5″ PC diskettes are still going strong! Maybe it’s that I like proven technology a bit too much….

I am disappointed this does not come with a VGA port.

You’d be far better buying a used one on eBay; cheaper, not adding to landfill, and comes in days not weeks!!!

The problem with these drives is that it only supports the 1.44MB format not 720KB

I decided to look on several well known shopping sites and they still list and sell 3.5″ floppy disks. Who would of guessed there was still a market.

Floppy disks and diskettes are synonyms, they are not given names to a specific physical size. There are 8″, 5.25″ and 3.5″ diskettes as well as floppy disks. 🙂 There was a discussion back in the day because 3.5″ disks had a “harder” shell compared to the “soft/floppy” shell of the 5.25″ and 8″ disks, but it was just that… a discussion and a confusion. Just last night I was thinking on getting the pieces for an older IDE/PATA motherboard (Socket A, Slot 1…) with a floppy port, just for the sake of showing my younger nephews how it was… Read more »

I have so many programs and data left on 5,25″ floppies that one day I’ll re-plug one of these old floppy drives (if they still work) just to re-read the data and archive them once for all. The younger people here would laugh at us, but floppy drives sometimes used to slowly decalibrate, causing written floppies to be partially unreadable on other drives, and you had to open them and re-adjust the head’s position by hand. It was a tedious task which could take hours because the required precision was around 1/10 of a millimeter and the calibration was not… Read more »

I was also surprised my floppies from 1990 were still readable.

@willy yes I remember that calibration! 😉 there were a lot of tricks to try to make vicious floppys readable again… but after all, it was fun I began with computers at IBM with punch cards, in late 70’s… when we need to transfer data from one system to another location, imagine how we do it? internet? ethernet? na we punch a batch of cards, stack them on shoe boxes and send it via car messenger. (in major cities we already manage leased lines comms, at incredible fast 2400 bauds, but sometimes the cards were more reliable) so, when 8″… Read more »

There is a similar unit available from Amazon.com for $10.96 at https://www.amazon.com/dp/B01JOPSRTM/ (CNXSoft: Link replaced, please don’t use shortlinks).

@makama80
More likely its Thailand to blame. I lived in Singapore for years, and a common household item was a “dry box” for cameras, floppy disks, and other things susceptible to the extreme humidity there. You may not have thought that mould would grow on a disk surface, but them little blighters are REAL survivors in the tropics.

Anyone remembers the (r)evolution of to format a disk in background using Windows 95 or OS/2 ?