Many years ago, when the first Bluetooth headset started to be sold, it was always a bit funny to hear people apparently talking to themselves while walking in the street. But soon enough, fellow walking zombies may start talking even more on the go, as Google and its partners have launched a new category of headphones with support for Google Assistant starting with Bose QuietComfort 35 II (aka QC35 II). 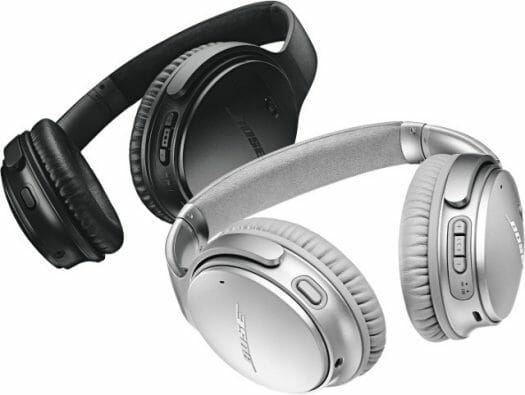 The new headphones are actually an update to QC35 headphones that not only adds Google Assistant support but also noise control settings. It’s not really as cool as it first sounds though. The headphones have an “Action” button to trigger Google Assistant, so no “OK Google” or “Hey Google”, and support is not exactly built-in, meaning you’ll still need to pair the headphones with your smartphone over Bluetooth.

You’ll then be able to hear your incoming messages and calendar automatically right from your headphones, even when you listen to music. It will also be easier to control your music, for example to access specific playlists, and get informed by asking your headphones to “play the news” from your favorite news source. Finally, you’ll be able to make calls without getting your smartphone out, press the Google Assistant button, and say “Call mum” and you’re good to go.

QC35 II can also be plugged to a 1.2m audio cable, offers up to 20 hours of battery life. The headphones are charged via a USB cable, and a 15-minute charge should be good enough for around 2h30 of listening time.

Google Assistant will be available to QC35 II headphones in the US, Australia, Canada, France, Germany, and the UK for $350 or equivalent.

My Sony MDR-1000X-es already have this feature. Press your finger to the right cup (the touch-sensitive one) for a few seconds and you’ll hear google assistant start listening. State your query then remove your finger. Not a heavily advertised feature but it’s there.

Text to speech for incoming notifications you’ve been able to do for a while with apps like ReadItToMe but a cleaner solution would be nice.

Yea, this has been around for years with pretty much any Bluetooth headset that has a button that triggers call actions:
– Single press = hangup
– double press = redial last number
– long press = activate Google Now or Google Assistant (depending on android version)
So really these are not bringing anything new to the table.

The QC35 1’s already do most of this, hold down the play button and you can use Siri, I imagine most voice assistants would work, not sure whats actual different in the new version except the dedicated button rather than holding play