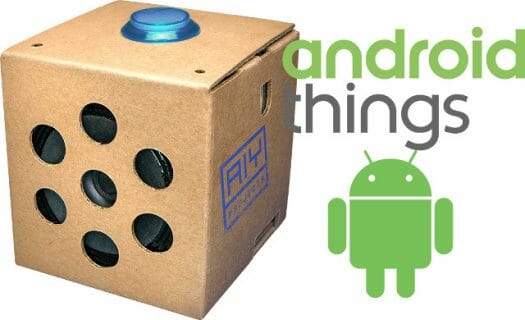 The operating systems works on any Android Things certified devices, but the example instructions  for Google Assistant API on Android Things also include steps to use Raspberry Pi 3 board together with AIY Projects Voice kit.

The developer preview 4 also adds I2S to the peripheral I/O API and is demonstrated in the aforementioned example, and new hardware support with NXP i.MX7D based Pico Board equipped WiFi & Bluetooth, Ethernet, USB ports, an audio jack, and an I/O expansion port.

You can download Android Things DP4 in the developer preview page.

For microphone voice input and connected audio products, the MediaTek MT8516 has interfaces for TDM (up to 8 channels) and PDM inputs (2 channels). In addition, the chipset has flexible memory support including LPDDR2, LPDDR3, DDR3, DDR3L and DDR4 to accommodate diverse platform needs.

New features in the developer preview 0.2.0 version are:
* Initial release of the library for Python.
* Ok Google and Hey Google hotword support for voice activation
* Ability to set alarms and timers.

Previous developer preview 0.1.0 release version already had:
* An RPC API is available to communicate with the Assistant.
* Python sample code is available.

Android Things Developer Preview 6 released with the following changes: * New IoT launcher that allows the user to see the current state of the device and change settings using a touch screen or USB input devices * OpenGL rendering disabled by default (since it may be faster without it), and needs to be enable manually if you need it. * Based on the latest Android 8.1 developer preview, with API level 27 * Easier-to-use android-things-setup-utility (still command line) can be used instead of fastboot and adb * New partition scheme -> the over-the-air update (OTA) system cannot update existing… Read more »