If you’ve ever created a quick prototype for your own use, or for your company, you may have based it on a development board, and added some extra modules or add-on modules, as well as potentially accessories such as hard drives or power supply. Software is complete and it works, but it may look like a mess, and transporting it may cause cables to disconnect or other problems.

STEGO BOARD should help in this case. It’s some kind of mounting systems compatible with the most common boards like Raspberry Pi 3, Rock64, or ASUS Tinkerboard, mini-ITX motherboards, mini PCs with VESA mounts, 2.5″ and 3.5″ drives, and so on. So you can create prototypes like the ones below. 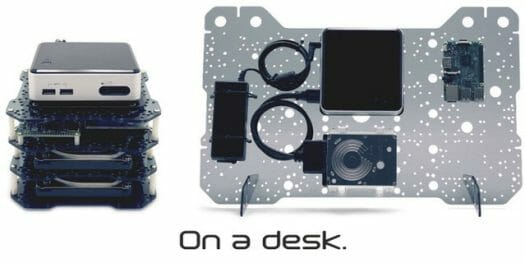 They also have 3D printers accessories to create prisms and cubes with the STEGO BOARDs, as well as hard drive caddies, power supply brackets, and cable guard. The developers also released a Windows based simulator to create a virtual prototype.

The STEGO BOARD has been launched on Kickstarter and almost reached its $8,850 CAD target. A $39 CAD pledge (~$31 US) should get you a STEGO BOARD 102 kit, while at the other end of the scale, STEGO BOARD 400+ requires a $105 CAD pledge (~$84 US). Shipping adds $17 CAD to $56 CAD, and sadly the company has decided to limit shipping to USA, Canada, and the United Kingdom only. Delivery is planned for December 2017. The 3D printed accessories are available on a separate website.

Nice idea :), but seems expensive for plastic, bolts & so forth :(.