Pi-Top was first launched in late 2014 via an Indiegogo crowdfunding campaign, as a modular DIY laptop powered by a Raspberry Pi board. It’s equipped with a 13.3” LCD screen with 1366×768 resolution, and uses a sliding top cover placed between the display and the keyboard where you could insert your Raspberry Pi with enough space for extra hardware.

This is a good week for DIY ARM laptops, as after the launch of Olimex TERES-I laptop yesterday, Pi-Top team has announced a new version of Pi-Top modular laptop with an larger 14″ display with 1920×1080 resolution, a sliding keyboard, and better cooling with a passive cooling unit for the Raspberry Pi 3 board. 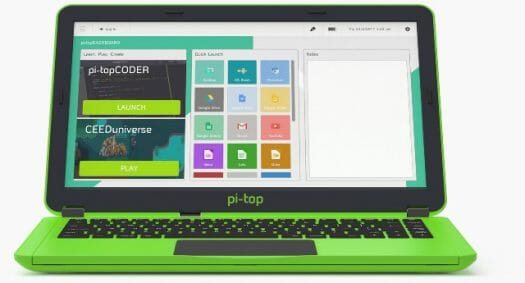 While the company only officially supports Raspberry Pi 3, it should be possible to use other boards that are electrically and mechanically compatible to Raspberry Pi 3 board such as ODROID-C2 or ROCK64, but you may have to work on the software side. The most adventurous could also try other boards, as Bero (Linaro) used a 96Boards compliant DragonBoard 820c board in the older version of Pi-Top with some custom cabling.

The new Pi-Top can be purchased for $319.99 including shipping with a Raspberry Pi 3, or $284.99 without. A free Inventor Kit with a breadboard, and various modules and components to get started with DIY electronics.

This could be a good idea for a low cost, use-everywhere laptop. The RPi isn’t quite beefy but indeed there are alternatives nowadays and the principle of making it easy to replace the motherboard is nice for this reason. I was initially happy to see that they used real keys and not Fn combinations for PgUp,PgDn,Home,End, until I noticed that they simply decided to remove the Insert key! So no more copy-paste to terminals 🙁 Maybe one of the strange looking keys on the left of the Del key can be remapped for this, but it’s annoying these days to… Read more »

This is an interesting concept but I see some issues with the actual implementation: – It would have been better to keep the 13.3″ form factor (maybe even go down to 12″ or 11.6″) and target the secondary, ultra-portable laptop role (which is suited better to the performance of the Raspberry Pi). – There should be a higher performance computing module offered, not only the Pi3. The Pi3 is fairly weak with those A53 cores. Something along the lines of 2 x Cortex-A73 @ 2.5 Ghz + 4 x Cortex-A53 @1.0 Ghz. I am unsure if the Pi3 can even… Read more »

willy :
This could be a good idea for a low cost, use-everywhere laptop.

Idea? Well, the implementation is a clumsy and expensive brick. I guess there’s a reason why their ‘tech specs’ neither mention display type nor device dimensions. This thing is wedge-shaped and judging by a short look the height with closed display might be up to 50mm at the side where the display hinges are.

@sola
When comparing with TERES-I VAT and customs situation should be considered especially when talking about EU customers.

@sola is right. at this price I expect some premium components.

Despite being a bit pricey, it’s actually a neat machine for kids starting to fiddle around with SBCs. Makes way more sense to me than Chromebooks or even iPads, which I see quite often in schools.

RPi is especially good for this due to GPU drivers. Most users use RPi as a HTPC anyways.