The UP Board is a Raspberry Pi like board with an Intel Atom processor that’s currently on Kickstarter with a few hours left, and it has just reached its 100,000 Euros stretch goal meaning that beside the 16GB storage / 1 GB version, a version with 32Gb storage and 2GB is now offered. The company also showed their progress with the implementation Debian based Ubilinux on the Intel Atom x5-Z8350 board. 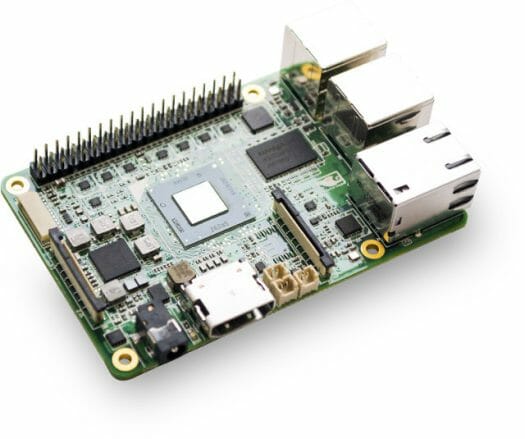 That means the specifications have now been updated:

The first 500 backers will get their 16GB/1GB board updated to 32GB/2GB configuration, but new backers can get the UP Board with 2GB RAM, 32 GB storage for 109 Euros plus shipping, while the first version still stays at 89 Euros.

In their latest update, Emutex Labs also showed their progress booting UbiLinux on the board.

There’s still some work to be done including support for GPIOs and I think audio, but the company also plans to port Ubuntu and Snappy to the board, and hopefully their work can be leveraged for other Intel Atom Cherry Trail based platforms.

1 GB of ram not gonna work for windows, but after all, I didn’t get the purpose of this board, it’s an x86 CPU, we can install whatever we like on it, LUBUNTU will run fine, why ubilinux on x86

I’m tired of waiting for a Linux compatible tablet.
Do you know if there are 7 inch or bigger touch screens (with 1200x800b resolution at least) that would work with this?

I’m tired of waiting for a Linux compatible tablet.
Do you know if there are 7 inch or bigger touch screens (with 1200×800 resolution at least) that would work with this?

In total 20 Euro less for this SCB could get me really interested (if Linux support will be decent, of course).

Note that their benchmark graphs says the X5-Z8350, not X5-Z8300, which is interesting. It looks like the final boards might use the slightly newer model from Intel.

peter :
Not bad, but I also think that this board a bit expensive. Intel lists x5-Z8300 for $25 – and one may get them surely for a bit less….
In total 20 Euro less for this SCB could get me really interested (if Linux support will be decent, of course).

@natsu
There are quite a lot of 1GB Windows 8.1/10 Baytrail-T tablets out there. In fact I own one. It won’t win any speed awards – but it does run basic stuff with few problems.

Thanks… I guess, it has been $25 a few weeks ago. Or maybe, I remembered it wrong.

TLS :
Note that their benchmark graphs says the X5-Z8350, not X5-Z8300, which is interesting. It looks like the final boards might use the slightly newer model from Intel.

Thats right. I looked a bit around in their comments on kickstarter – they say, they will use X5-Z8350.

what about a ir receiver?

this would make a awesome kodi device