Back in June, we reported about μduino board, which at 12×12 mm may well be the world’s smallest Arduino compatible board. It is based on Microchip Atmel ATMEGA32U4 8-bit AVR microcontroller.

But there’s now a new board in town which claims to be the world’s smallest 32-bit Arduino board: Exen Mini measuring 14.9×14.9 mm. While I’m patiently waiting for an Intel’s DMCA request, or more likely an email requesting an update once the name has changed, like I had to do for Vigekwear, let’s have a look at what the board has to offer.

The board is breadboard compatible, pre-flashed with Arduino Zero bootloader, and can be programmed in the Arduino IDE just like the original board. 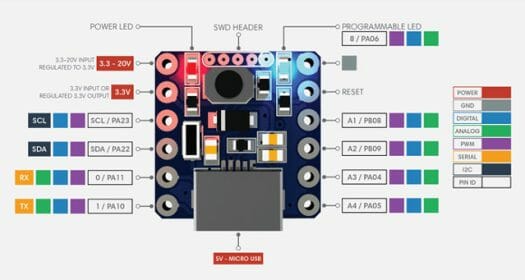 Nerdonic, the company behind the project, is also working on both a slightly larger version of the board with 20 I/O pins, and and even smaller version using 1.27mm pitch headers. An ecosystem with modular shields/hats is also planned, but no details were provided.

The project has been launched on Indiegogo with a flexible goal. Early bird rewards start at 10 GBP (~$13.2 US) for the board with shipping adding 2 GBP to the UK, and 7 GBP to the rest of the world. In you’d like more than one, you can save on shipping by getting 5 or 10 boards packs. Delivery is scheduled for December 2017.

Wait, it lacks SPI pins….I personally don’t know what is the point of making it too small while sacrificing basic peripheral connectivity.

@Bumsik Kim Don’t forget the native FS USB, which along with the small size more than makes up for missing SPI imho. Think of the tiny HID- or MIDI-class devices made possible, especially of the wearable variety. Also consider the concept of “smart” peripherals, such as motor control of a drone, with a gyro and accelerometer on the I2C bus, movement/attitude commands and reports over serial (or FS USB), and the remaining four (or six) PWMs driving motors or servos. Or a galvanometer driver for mirrors for laser projection of images from RAM or ROM. Or a small, battery-powered six-channel… Read more »

@Brian
True, but it’s more like a module than a development board IMHO.

As expected Atom X1 board had to be renamed, and it’s now called Exen Mini.