Lots of Android TV Boxes and HDMI dongles have hit the market last year, and low cost home automation systems have been launched, or are in development, such as Ninja Sphere. Webee Boss combines both to make your TV and your Home smart, as part of the Webee home automation platform, also composed of “Bees” (Smart Plug, Smart Lamp Holder, Smart Host, Presence Tag, Open/Closed sensors, etc…), Hive m3 development board, and an Android app.

This IoT gateway runs Android 4.0, and apparently comes with an RF remote control with a gyroscope based on the video demos. They did not specify exactly the processor used but based on the CPU frequency, and OS supported, it could be AMLogic AML8726-M3 or Freescale i.MX6 Solo. So do not expect performance similar to Rockchip RK3188 or AMLogic AML8726-MX devices. 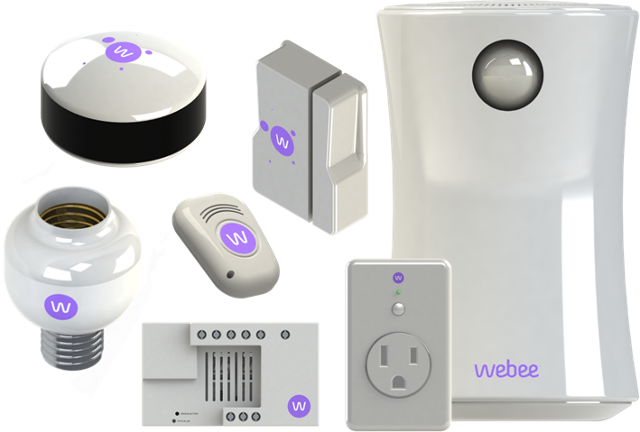 They also have several Bees to make “dumb” objects “smart” and communicate with the Boss via Zigbee:

Nest thermostat, Phillips Hue light bulbs, your Wi-fi washing machine, and other wireless sensors using Wi-Fi, Zigbee, or Z-wave will also be able to report to the Boss.

You’ll be able to monitor and control your Home via the TV, or with My Webee, an Android app to be installed on your smartphone or tablet. An iOS version is also in the work. The Boss will learn about your habits overtime, don’t they always do?, and become clever as time passes by, letting you know if you forgot to turn off the lights at a time when you are not supposed to be at the office for instance.

Independent developers and hobbyists will be able to create their own Bees thanks to Hive M3 development board based on Silicon Labs EM357 ZigBee ARM Cortex M3 IC, which can be interfaced with other hardware such as Arduino, Raspberry Pi, BeagleBone Black, etc… via SPI or RS-232 to provide wireless connectivity. There will also be an SDK to create custom Android apps for both the Boss, or your smartphone.

The company behind the project has launched a flexible Indiegogo campaign which has already reached its $50,000 funding target. You can pledge $109 to get Webee Boss, but it’s probably more useful and fun to go with a kit with a few Bees such as the $259 “PLUG and PLUG OFFER” that adds two smart plugs, a smart lamp holder, and one open/closed sensor. The development kit with Webee Box and three Hive M3 is available for $149. You’ll need to add $30 if you live outside of the US. Perks are expected to ship in April 2014. Access to Webee Cloud will always be free to backers.

There are very few technical details on the Indiegogo campaign page, and you’d better check out Webee product page.

Way too slow ARM CPU. And Z-Wave is the most expensive home automation protocol.

@Harley
For Android Smart TV, the processor is a bit dated, but for an IoT gateway it should be fine.
I think their Bees are using Zigbee, because the Hive M3 board provide Zigbee connectivity, and they may have added ZWave for compatibility with existing solutions.