Launched in 2012, AMS AS3935 Franklin lightning sensor  is – at its name implies – a lightning sensing IC. The chip was designed for low power, portable or fixed wire-line applications, and beside detecting electrical emissions from lightning activity, it can also provide an estimation of the distance to the head of the storm from 40km away down to 1km, while filtering out other signals from motors, microwave ovens, etc…

I’ve found two maker boards with the chip: MikroElectronika Thunder Click board compatible with MikroBUS socket (available now), and SwitchDoc Labs Thunder Board recently launched on Kickstarter, but that may be easier to use since Raspberry Pi and Arduino kits are offered. 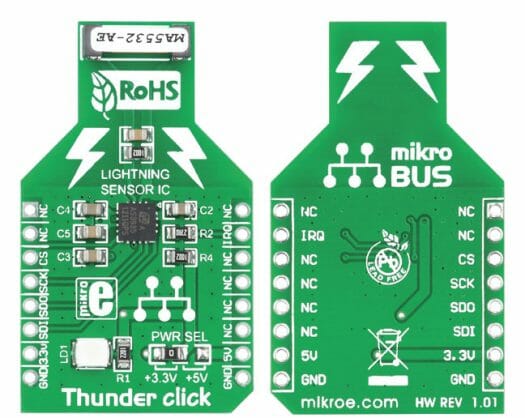 You’ll find documentation and examples on the product page, where you can also purchase it for $35.  The board is ideal if you own a board with a mikroBus socket such as Hummingboard Gate, or Microchip Curiosity, although MikroElectronika sells MikroBus adapters for Arduino and Raspberry Pi boards. Note that the sample are for Microchip PIC32, so you’d have to adapt the code to your own platform.

SwitchDoc Labs Thunder Board and Kits 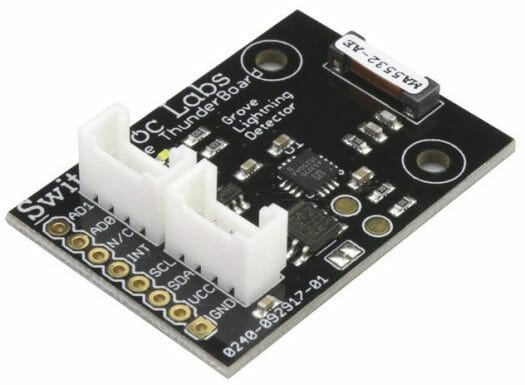 Specifications are basically the same as for Thunder Click boards, except it exposes two Grove connectors for Seeed Studio modules, and it interfaces to the host processor via I2C instead of SPI, and include 3 I/Os for interrupt and 2 analog inputs on the header.

But if you want something really easy to get started, the IoT Kits for Arduino or Raspberry Pi Zero W are the way to go. They are plug-and-play with an LCD display showing lightning info and a buzzer sound the alarm when lightning is detected, customizable thanks to open source software, and can be connected to the Internet over WiFi. 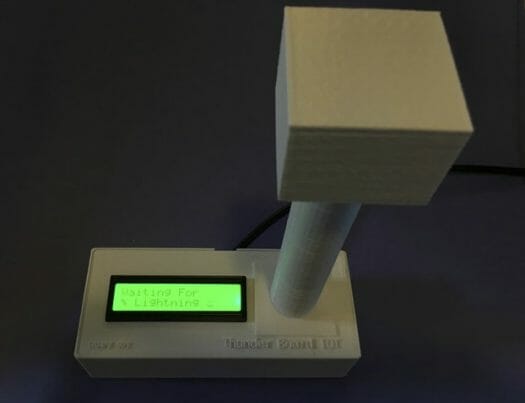 The kits can transmit data to Pubnub over MQTT, which then displayed on Freeboard Internet dashboard as shown below. 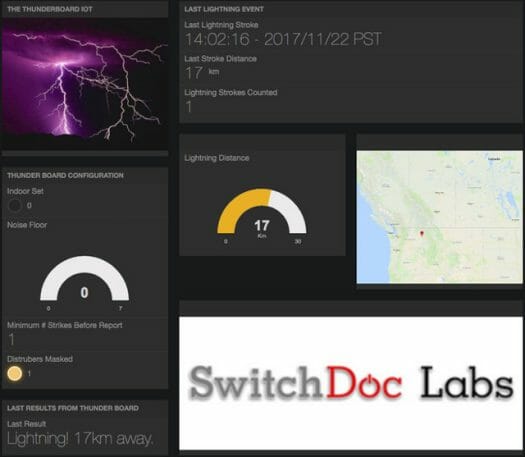 Since lightning only occurs during thunderstorms, it would make testing problematic, or at least very slow, if you just had to wait for natural occurrences. So the company also made the Thunder Lightning Simulator board based on Arduino.

The Kickstarter campaign has already surpassed it funding target with over  $5,000 raised, and 12 days to go. A pledge of $23 should get your the Thunder Board, a $75 pledge is asked for respectively the Arduino and Raspberry Pi kits with 3D printed file, while $170 is needed if you want a complete Arduino kit with case and simulator. Shipping adds $3 to $30 depending on rewards and destination. Delivery is scheduled for next month.

I clicked on this story expecting to get a good laugh, but now I want one. I can really see how these might be useful if not life saving.