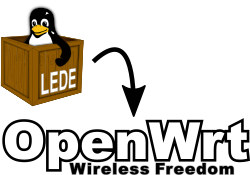 The LEDE project was created in 2016, as a fork of OpenWrt because of a split among developers, so we had OpenWrt and LEDE projects running side-by-side for nearly two years now. However, there were also talks of reunification in 2017 during an Embedded Linux Conference sessions entitled “OpenWrt/LEDE: When Two become One”.

The good news is that OpenWrt and LEDE projects (re-)unification is now official, and the project will be known as OpenWrt.

Developers will follow the LEDE project rules, merged code is now hosted  @ https://git.openwrt.org/, and mirrored on Github (https://github.com/openwrt/openwrt) using the code base of the former LEDE project together with OpenWrt specific patches that meets LEDE’s code quality requirements. The original OpenWrt codebase has been archived on Github.

The OpenWrt CC 15.05 release series will still receive some security and bug fixes, but older version will not be supported anymore. The LEDE 17.01 release will still get security and bug fix support for both source code and binary releases.  The resources on lede-project.org domain will be soon be moved to openwrt.org subdomains and redirects put in place. However, the developers are still debating about the merger of the forums and wiki, so they will be available on both domains until an agreement is put in place.

We also learned from the announcement that the merged project is represented by Software in the Public Interest (SPI) non-profit organization that will handle donations, manage OpenWrt trademark, and help with potential legal issues.

it’s very good news for the embedded networking community.
openwrt is a very powerful brand name in the linux world

It seems they are closing all Pull Requests without any justifications:

Anyway one year to merge code is an insane amount of time.

And it ended up being the branch of that fork that needed to continue forward, really. It’s still got issues in development terms, but for some classes of devices, this stuff’s KING and rightly so.

Actually LEDE-replacing-OpenWRT already killed by builds for the last two days on a client’s prototype that is being shown at the CES… what a horrible timing!
LEDE forked away from OpenWRT for the better (may be, esp. as OpenWRT was stuck), but well,… OpenWRT used to work smoothly for 13 years, while LEDE is still in its infancy, so why kill the father?!
Also, it looks like useless rebranding for me, in the same way Oracle could not but change zillions little places in java when it bought it from Sun (.* made by Oracle). Seriously, LEDE was a fine name in the first place, and it made it clear that OpenWRT was something else. Now the ambiguity will probably cost a lot of time to many people.

Bad News! Two are better than one when it comes to competition and fallback/redundancy.