There are now some tiny and low cost ($15 to $20) Wi-Fi modules supporting OpenWRT such as VoCore and AsiaRF AWM002. However due to their small size they may not be that hacker’s friendly as they can’t have 2.54mm headers due to heir small size, and I’ve recently received AsiaRF AWM002 only to find out it not only needs 3.3V supply voltage, but also 1.8V and 1.2V. So I’d need to make my own power circuit with the required LDOs, or purchase a $20 base board to use the module. Here comes WRTnode another larger Wi-Fi module but with more usable 2.54mm headers, and based on the more powerful Mediatek MT7620N processor @ 600MHz. 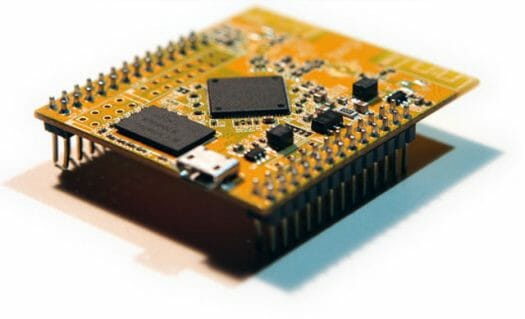 OpenWRT is based on BARRIER BREAKER release with various patches (opencv 2.4.8, linino, …), demos (opencv, mechanical control, and RESTful), and source code available on github. The project also claims to “open hardware”, but for now they’ve only released the schematics (PDF), with the BoM and PCB layout being released layer. The board has apparently been designed by a company called DFRobot (TBC), and robotics projects and shields are planned for WRTnode, and “WRTnode IoT development framework SDK” will be released at a later stage with a graphical IDE, “enhanced AI algorithms”, RESTful, and more.

You can watch a demo with WRTnode running OpenCV and controlling uARM robotic arm to pickup coins, and move them into a cup.

They have already sold a few beta boards in China, but the module is not currently available for purchase, but it will sell for $25+ shipping on DFrobots, SeeedStudio, and a few other sites. You can find more information on WRTnode website.

A module may not be the best approach for hacking with these chips. By their very nature modules are not complete systems. You will have to build a bunch of support circuitry around them. A complete board like this might be better for hacking…. http://www.asiarf.com/IoT-Home-Automation-Sever-WiFi-11n-MT7620-High-Speed-Multi-Functions-Router-Board-AP2620-P-product-view-388.html That board includes the power supply and Ethernet connectors. Plus it has plenty of connectors to access the other parts of the chip. Only use a module after you get your initial design done and want to make fifty copies of it. I use Dupont jumpers to bring signals from boards like these over a… Read more »

@Jon Smirl
Yes my mistake, I should have checked MT5370 datasheet first. I knew about the 1mm header, but I thought I could would just need to solder wires to 3.3V / GND, the UART pins and the GPIO I wanted to use to make it work. I did not expect to have to build the power circuitry.

If you had the tiny baseboard for the AWM002 it would have been much easier for you to use. It takes 5V in and makes the rest.

WRTNode is made by the team from China which i happen to know. DFRobot is the second largest seeed like distributor in China.

Sadly, the A version though.