Espressif Systems have been working on audio applications like Smart Speakers based on ESP32 WiSoC with hardware development kits like ESP32-LyraTD-MSC Audio Mic HDK, and I could test it with Baidu DuerOS using Mandarin language.

However, at the time (February 2018), there was not much else that could be done with the hardware kit, since no corresponding ESP32 audio software development kit had been made available. This has now changes since Espressif has just released ESP-ADF Audio Development Framework on Github. 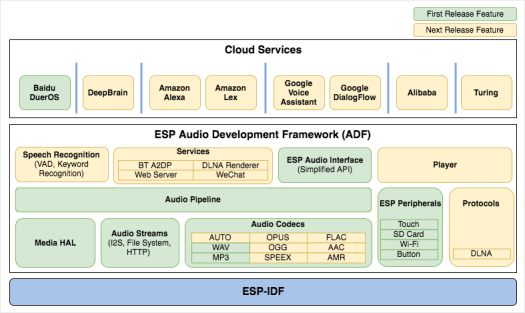 The framework will support the development of audio applications for the Espressif Systems ESP32 chip such as:

As we can see from the diagram above, the first release supports Baidu DuerOS, WAV and MP3 audio, and ESP audio interface. The company will keep working on the framework to add more Cloud Services (DeepBrain, Alexa, Assistant, Alibaba…), Bluetooth support, DLNA support, and more audio codecs.

While several ESP32 boards will eventually be supported,  there’s no documentation specific to ESP32-LyraTD-MSC “round” board yet, and instead a Getting Started Guide has been published for ESP32-LyRaT V4 board pictured above.

You’ll need to install ESP-IDF (Espressif IoT Development Framework) before using ESP-ADF, and to learn more details you may want to read the online documentation. ESP-ADF is released under ESPRESSIF MIT License.

That is pretty nice. I am looking at the board and it looks like is having everything from SD card to battery charger. It looks very promising. I hope that they will ship some prototypes like they did with ESP32 so we can get an early look. I would love to integrate it with Amazon, I have experience with this.

I understand that those privacy-infringing cloud-based voice spying services are all the hype right now, but personally i’d much prefer to have all language processing done LOCALLY instead of sending the data to some server. Now that would of course imply a bigger SoC and more flash mem so as to locally deep-neural-process the externally prepared language model data. On the other hand, an application field where a small cheap stream-only SoC like the ESP32 would be perfect would be SIP-based audio routing and telephony (e.g. for telephony, intercom, and for routing the audio to all places in home to… Read more »

These devices listen locally for the hot word. Only after hearing the hot word do they transmit the next phrase up to the cloud. The do not transmit continuously. For the paranoid, you can disable the hot word detection on most devices and switch it to a button press.

Sure you could make a big, local machine do the voice recognition and convert it to text locally, but you’d still be sending the same query to the cloud in text form, so what’s the point?

Jon, I have respect for your views and experience, however, playing Devil’s advocate myself. We all thought those worried about Facebook, were paranoid. Perhaps we all need to be less naively trusting?

Use a network sniffer and look at the network traffic if you are worried. You will observe that there is not a continuous flow of data. It also simply impractical to think that Amazon is processing live 24/7 audio data from 300M echo devices. The compute resources for that don’t exist. Plus the data is useless. 99.99% of what they pick up would simply be a TV or music playing. This Facebook stuff is completely overblown too. The API that was used to harvest this data was removed over four years ago. The hubbub is because the press found out… Read more »

First of all, there doesn’t have to be any “big” machine for voice recognition. What really eats up significant computing power and memory is the model training, which is not at all what we’re talking about here. The voice to speech conversion with the done trained model would work with a cheap SOC such as an Allwinner chip. That’s a category above the ESP32 but still lightweight and cheaper than a lunch. And NO, it’s NOT as if all voice applications would be limited to sending a query up to the cloud. There’s a LOT of voice applications that wouldn’t… Read more »

Does near field hot word work with this kit?

I see the note now in the first diagram that the code is coming, but not here yet.

but where do i get the lyra kit from?