Back in November 2016, I connected Sonoff TH16 WiFi switch to my water pump, and since then it worked fairly well, except for the occasional “offline error” in eWelink app, which was usually solved with a power cycle.

But in the last couple of days, I noticed the pump would not start at the set time, and I could not control it using the Android app either, even after turning on and off the power. So I took it out to have a look, and one component indeed burnt.

ITEAD Studio released the schematics in the Wiki, and the dead component is connected to a GND as well as to a transistor, so it must be R2 4.64 Ohm resistor [Corrected from R3 resistor after checking board with multimeter].

But what may have caused this? Resistors burn because too high of a current flows through them. We often have micro power failures here, the type that lasts about one second, so there may have been a spike? But if we look closer, we can see the switch also served as some sort of electrocution chamber for ants and spiders… 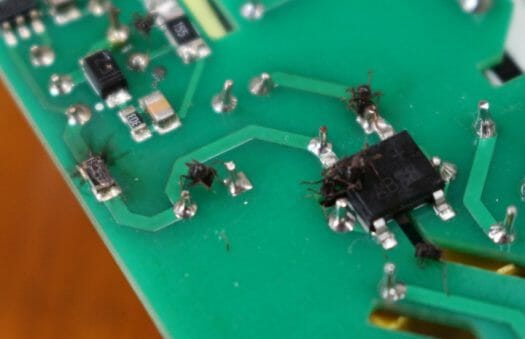 One ant decided to short C3 capacitor, located right next to our dead resistor on the PCB, and another seems to have shorted two pins of the transformer, not to mention all the many ants “connected” to U1 bridge. So I suspect this is the actual reason: my Sonoff switch was destroyed by an ant!

Solutions: use a waterproof case, or maybe more local solution with a DIY case made PVC pipe to make the casing insect-proof. [Update: Also see other solutions in the comments section].

Is that Sonoff? I’d like to report a bug in your product…

I had a similar problem with an amazingly difficult to access air conditioning unit – slugs squeezed through the hole for the condensation outlet almost directly into the power supply, where they sizzled until the fuse popped, taking out lumps of ground plane each time. I ended up using so much expanding foam and insulation tape to try and protect the board from them, and also put the fuse on a flying lead so I could replace it without spending a morning in a roasting conservatory dismantling the unit. Could you maybe fill the gaps in the case with an… Read more »

Silicone caulk is an option, but I’m not sure how durable that is with heat and humidity we have here. Ants are very smart getting in all sort of devices. This year they decided to setup nests into a weighting scale, a mixer robot, a water boiler, and a binding folder in my house. I may have missed other locations.

RTV silicones should be fine, I use them very regularly around electricity. Temperature and humidity will not be a problem. Just make sure that you get one that doesn’t conduct electricity (I’ve never used one, but some are advertised as thermally and/or electrically conductive).

Warning on that advice: Regular hardware store RTV silicone off gasses acetic acid. This will react with just about every metal on the PCB and can cause pretty dramatic corrosion (I’ve seen traces turned to powder). You need to use a platinum cure rtv silicone around electronics.

Here you go Cnx not a clue if they work
https://www.hunker.com/13406103/how-to-get-rid-of-ants-around-electrical-wires

Spraying chemicals is not such a good long term solution, especially for a box that stays outdoors.

Electronics Varnishes & Lacquers will save such devices for ages. I had the Electrolux wash machine that was not lacqued from the factory (!) just because they want its electronics not to last too much. I think it is already working > 20 years just because of lacque sprayed over the board 😉

It was a BUG

I sent the story to ITEAD Studio. Here’s their answer:

I think the ant sacrifice his life to prove the necessity of conformal coating.
We are discussing the process during the past few weeks

So maybe future Sonoff devices will be insect-proof.

Conformal coating was my first thought after reading this (well, shortly after the “sucks to be that ant” thought)

That’s exactly what it needs, a couple layers of conformal coating will seal the board to humidity and ants. (And likely get them closer to something UL wouldn’t laugh at.)

Reminds me of a part from the classic 1970s sci-fi film ‘Phase IV’.

I don’t thint that the burned resistor is R3. To me it looks as R2, the current sensing resistor. It was probably the ant shorting pin 1 and 2 on the trafo that caused the destructive failure. It probably also took both U1 and Q1 with it in the fall.