Since Class A2 was announced about 18 months ago, I simply assumed Class A2 SD cards were already available, but to my surprise I was wrong, as according to AnandTech, Sandisk Extreme micro SD cards are the first of the kind soon-to-be available commercially. 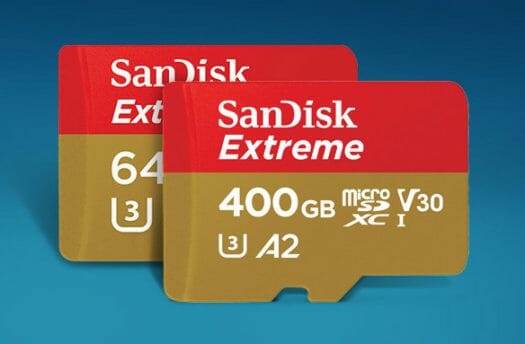 SanDisk Extreme Class A2 micro SD cards are not the fastest when it comes to sequential read/write speeds, but they’ll be one of the best for random I/O performance which is paramount while running programs. databases, or full operating systems from the SD cards.

Just wondering what has to be there from the reader’s side to profit of those cards.

Will an orange pi profit? The usual realtek cardreader in a laptop?

Nothing really, as these cards are mostly about random reads/writes. The sequential speeds you’re not going to see in a lot of devices, but almost everything can take advantage of the random improvements. It’s still quite slow, but the random read performance is about twice that of traditional micro SD cards, maybe even four times if you compare to cheaper cards. That’s should prove to be a huge boon to booting OSes or starting apps.

> the random read performance is about twice that of traditional micro SD cards, maybe even four times But the random read performance is not that important with most use cases. > That’s should prove to be a huge boon to booting OSes or starting apps. Based on my tests I have to disagree since booting times are not affected by type of SD card used: https://forum.armbian.com/topic/4167-f2fs-revisited/?do=findComment&comment=30835 (and based on other measurements done “starting apps” is mostly sequential IO) Usually random write performance makes the difference with use cases like “surfing the web” since browsers constantly write to disk (profile… Read more »

Sorry, but what are you smoking today? Of course the random read performance is important, in fact, it’s one of the most important factors of flash memory and why it’s so much better than mechanical drives. Normally I value your input, but this time, you’re just plain wrong.

> what are you smoking today?

Have a nice day.

random read is important too but it often is intermixed with random writes, which cheap cards have in 1-10iops range. basically slowing everything down to hell. that’s why random 4k iops is the most important factor for the user/app

Those el cheapo Orange Pi are only capable of the slowest SD card mode (DDR50) which not only limits sequential transfer speeds to ~23 MB/s but also negatively affects random IO performance. See comparison of two A1 rated cards running in an ODROID board one time with SDR104 and one time limited to the slowest DDR50 mode: https://forum.armbian.com/topic/954-sd-card-performance/?do=findComment&comment=49811 In other words: Nope, the more expensive A2 rated cards do not make any sense with SD card implementations limited to ultra slow DDR50 mode. Get an A1 rated card instead (the cheap SanDisk A1 Ultra at 32GB seems to be best… Read more »

Does any of the allwinner, amlogic or rk chips have a more capable sd controller? Its still bit confusing…

The ODROID-C2 supports UHS-1. Some of the allwinner *chips* can support higher speeds, but I don’t know of any board that implements the voltage switching logic necessary to actually make use of it–it’s not in the reference design, so no one does it. 🙁

You need to be careful since on some boards the faster modes end up with data corruption (I remember discussions at ODROID forum leading to reduced clockspeeds and a pretty recent discussion in Armbian forum talking about Libre Computer Renegade and data corruption in certain situations — IIRC increasing current (mA) for the SD card resolved the issue). Anyway: I just ordered a 64GB SanDisk Extreme Plus A2 to be tested with one of my NanoPi NEO4 in both DDR50 and SDR104 mode within the next days looking at ‘raw performance’ and typical use cases and comparing with A1 rated… Read more »

There’s potential. Theoretically with 2000 4k random read IOPS you get at most 8MiB/s. So by doubling that to 4000, you can get at most 16MiB/s. There’s some overhead to setting up an IOP, etc. etc., but there may still be potential even on Orange Pi for faster random reads and certainly writes.

But it depends on your workload. I have a postgresql RDBMs running on some of my Pi’s, so it may or may not help there. It remains to be seen.

So is this the reason for 30% sale on their official AliExpress store of many of their cards:

Seriously: why do you expect any of those ‘SanDisk’ products listed on this Aliexpress page to be genuine? Look at the prices and you know that they’re all fakes.

Buying flash memory on Aliexpress or eBay is insane… on Amazon’s ‘marketplace’ the chance to get counterfeit crap when buying cheap flash memory products is still above 50% but at least you’re in a better position to get a refund when you received the faked products.

It especially makes no sense as the price differences are not like you save a whole lot of money, so the risk of buying overseas is not worth it for me. I prefer to buy such parts locally or from neighbouring countries, with similar legal systems…

If you buy flash memory products on Aliexpress, eBay or Amazon’s marketplace the chance you buy counterfeit products is well above 50 percent. SanDisk estimated that ‘1/3 of SanDisk-branded memory cards on Earth are actually fakes’: https://petapixel.com/2018/05/31/beware-amazon-still-sells-counterfeit-memory-cards/ So always test your flash memory products directly after purchase for fake capacity with either F3 or H2testw. And if you bought an A1 or A2 rated card it’s even easier to check for fakes since you simply need to test the random IO performance (use CrystalDiskMark or iozone when not running Windows). If it doesn’t meet specs simply ask for a refund.… Read more »

I don’t expect anything. I buy from that store regularly, and I verify the serial on the SanDisk website. It matches and the card works as expected, incl. speeds.

The prices usually match what I can get locally from reputable sellers, too (sans 21% VAT and special storage tax, which is the reason I buy in China). This time it’s cheaper, but usual discounts are in the range of 0-5%. So I don’t have a reason to distrust that seller.

Check the images on the left. An 8GB SanDisk Ultra A1 which is something that simply doesn’t exist as product.

No thanks, I don’t want to buy in an online store advertising fake products and using a shopping platform that is known to have a time consuming and unreliable return/refund procedure and is known for selling counterfeit flash memory products since ages.

Image is weird, but they don’t actually sell it. Products I received were genuine. So unless counterfeiters stepped up their game, and hacked verify.sandisk.cn or stole plenty of verification code stickers, and started faking their cards so they’re unrecognizable from genuine ones I bought locally, I’ll enjoy my cheaper uSD cards.

Best reading this section of their site

you get what you pay for. you pay for trash, you get trash. then you decide what you have to do with that trash once in your home. buyer beware

Do you have an actual experience with that particular store?

no, but since you’ve bought from them, do you have iozone tests to compare? (and potentially identify fakes)

What’s your use case that you’re focused on MB/s?

I know that currently A2 rated cards of same quality are cheaper than A1 for whatever reasons (ordered an 64GB Extreme Plus A2 for 31€ shipping/VAT included and would’ve to pay 10€ more for the slower Extreme Plus A1 variant).

But why are you excited about MB/s and not IOPS?

That is not the point, AFAIK not many devices (other than phones) even support A1 or A2 standard.

99% devices got limited speeds, aka same speed as cards without A1 or A2 standards. But prices are good, even 128GB card cost 59 euros on my local reseller:

Could be good for Nintendo Switch etc.

> AFAIK not many devices (other than phones) even support A1 or A2 standard There’s nothing to ‘support’ since A1 and A2 are just ‘speed classes’. This time not wrt sequential but random IO performance with 4k block size. The promise is that an A1 compliant card exceeds 1500/500 4k random read/write IOPS and an A2 rated card has to exceed 400O IOPS for read operations and 2000 IOPS for write operations. > 99% devices got limited speeds, aka same speed as cards without A1 or A2 standards Nope. But it seems really hard to understand the difference between sequential… Read more »

“Where to buy” via Sandisk page is safest option, I got few bad cards in the past from the Amazon. Since my favorite local reseller “Jimm’s” got cards available from official sources, never looked any other shops for sandisk cards.

Well, my ‘A2’ card has been bought directly at Amazon (not Marketplace where you almost always end up with counterfeit flash storage products). The capacity is real (tested and confirmed by f3) but performance simply sucks since way lower compared to my A1 rated cards:

https://github.com/ThomasKaiser/Knowledge/blob/master/articles/A1_and_A2_rated_SD_cards.md (random write IOPS even lower than 600 — I made a mistake yesterday when reporting 800)

Next step: negotiating return/refund with Amazon due to storage product not showing the promised performance.

I tested now two A2 rated SanDisk cards and both are not faster than the cheapest A1 rated cards (Ultra A1).

My test environment relies on ext4 and Linux, most probably those A2 cards only ‘perform’ sufficient when used with ExFAT?

Hmm… after reading Part1_Physical_Layer_Simplified_Specification_Ver6.00.pdf I think I got it. A2 unlike A1 requires the host being also A2 ‘aware’ since A2 performance makes use of a volatile RAM cache on the card and command queueing which requires driver support on the host side. That might explain why the two A2 cards I acquired perform somehow compliant to A1 performance characteristics (since A2 compliance includes A1) but do not perform better than the more expensive A1 cards. A2 performance class requires driver support at the host to activate the card’s cache and also issue cache flushing (the specs talk about possible… Read more »

Yup, sandisk just wanted some testers for new A2 cards 😀 reason why they are cheaper than A1 cards.

Bought A1 cards myself, almost bought A2 cards but good I did see this first.