Portable USB SSD drives are nothing new, but they are usually implemented using a stand-alone SSD with its own SSD controller combined with a USB to SATA or PCIe bridge chip in order to interface the SSD drive with the host computer or board. 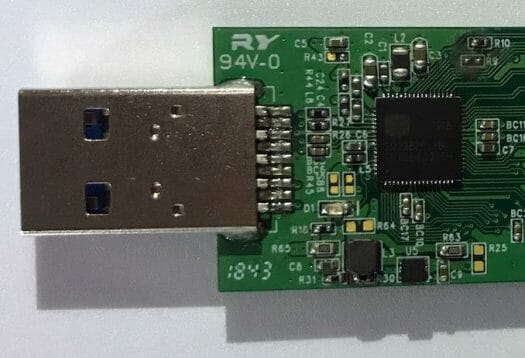 Some of the key features of the SM3282 controller include:

The chip also supports the USB Attached SCSI Protocol (UASP) and 2 NAND channels with 4 CE (Chip Enables) per channel, enabling up to two terabytes of storage with the latest generation of 96-layer QLC NAND.

The company showcased its new USD SSD controller at Computex 2019, and Anandtech had the opportunity to visit their booth and take a few photos. We can see several prototypes of longish USB SSD sticks based on Intel, Micron, Samsung, SK Hynix, Toshiba, and Western Digitial NAND flash devices.

Silicon Motion SM3282 will be sampling to their customers later this month (June 2019), so we can expect commercial drives in a few quarters.

ahm, that would also explain missing sandisk sample on the picture

Never heard of this before. I only know of

OK. So this is madness -> https://www.usb.org/sites/default/files/usb_3_2_language_product_and_packaging_guidelines_final.pdf

Ah, just like “USB 2.0 full-speed” used to be the new name for USB 1.1 20 years ago to please all laptop manufacturers who then had to just change a sticker to become compliant. It looks like these marketing tricks work all the time, so why would they stop ?

> It looks like these marketing tricks work all the time, so why would they stop ?

The USB-IF always recommended to use ‘Full Speed’, ‘Hi-Speed’ or ‘SuperSpeed’ and never encouraged to use the protocol revisions to be used as speed indications. Unfortunately ‘Full Speed’ was magnitudes slower than ‘Hi-Speed’ and so the mess began 😉

> So basically USB 3.2 Gen 1 is the new name for USB 3.0 Well, we all should’ve used ‘SuperSpeed’, ‘SuperSpeed 10Gbps’ and ‘SuperSpeed 20Gbps’ from the beginning. But now it’s definitely too late 🙂 And I guess it’s time to read USB 3.2 specs again since back with USB3.0 (SuperSpeed) we had a 5 Gbps signal rate with 8b10b coding resulting in data transfer rates not exceed 4 Gbit/sec while USB 3.1 Gen2 introduced the more efficient 128b132b coding (almost 5 Gbit/sec or almost 20% more real throughput compared to 8b10b). But ‘USB 3.2 Gen 1’ most probably also… Read more »

yes,that’s where I was going with it as well. The hack to add two 5Gbps links together for cabling that can’t handle 10Gbps sounds nice, but it’s not going to be the same speed in the end.

OTOH this is about theoretical top speeds. As a user having only an inferior USB-C cable at hand I would be grateful if connecting two USB 3.2 devices with this cable results in an SSD bandwidth of ~700 MB/s instead of just 400 MB/s with a single Gen1 link. So this ‘hack’ is really an improvement for real world scenarios.

I was always thrilled by the ports markes “SS” on my laptop. At least its not in ancient German calligraphy…