MINIX NEO S1 & S2 are USB-C hubs with the usual HDMI and USB outputs, but also a built-in 120 GB & 240 GB SSD respectively. The company has sent me a sample of each, and in order to test the platform, I decided to do on a Khadas board running Ubuntu 18.04 with LXDE desktop environment (aka Lubuntu). I’ll start by checking out the packages’ content, before going through my experience with the MINIX NEO S2 USB-C hub in Ubuntu 18.04 with LXDE desktop environment.

Both packages are basically identical except for the different color, and one shows 120GB SSD capacity, while the other has 240GB

The back side has some more details about the USB-C hub.

I’ll focus on the 240GB model since it’s just the same, but around $13 to $20 more expensive, and it offers double the capacity, as well as slightly higher performance.

The USB-C hub ships with a carrying pouch and a user manual in English and German. You can check out the user manual here. 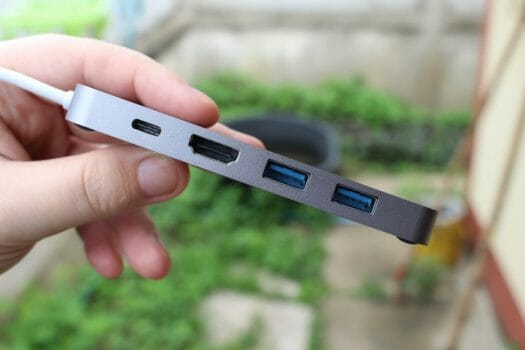 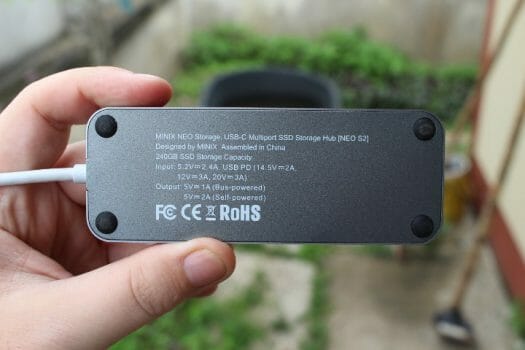 The back of the device has some important information, also present in the manual, namely power output limitations:

Oops, my bad… Luckily, I had previously reviewed Khadas Edge + Captain  SBC and still had the sample on hand. So I downloaded and flashed the latest Ubuntu 18.04 image (Edge_Ubuntu-lxde-bionic_Linux-4.4_arm64_EMMC_V20190116.7z) and connected MINIX NEO S2 to its DisplayPort Alt. Mode capable USB-C port.

I first tried it in bus-powered mode (5V/1A) with the USB-C hub getting its power from Khadas Edge USB-C port. I had to disconnect my USB 3.0 hard drive as the board would just not boot that way. That means I only had the HDMI port and a USB RF dongle connected to the hub.

The good news is that dual display works out of the box that way but in mirrored mode. Most people would likely want to use extended desktop instead.

There’s no such option in the Display Settings of LXDE desktop environment, where we can just turn on and off video output, and adjust the resolution & frame rate.

But there’s a solution involving the installation of arandr Xrandr GUI:

We can now go to Preferences > Arandr to launch the Screen Layout Editor and organize our displays HDMI-1 and DP-1 as needed. 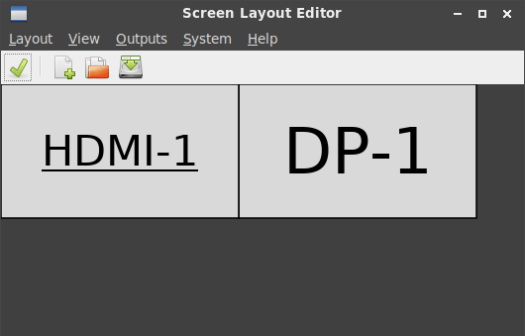 Click on the Apply icon (green tick), and we’re all good. 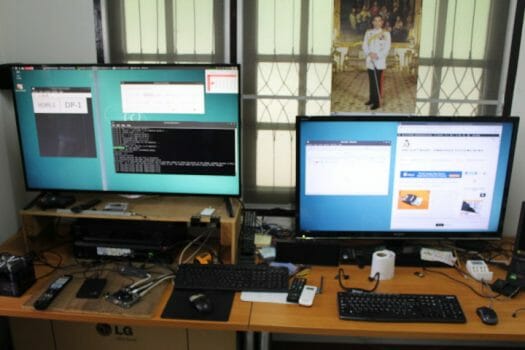 The SSD is also properly detected and mounted as shown in GParted screenshot below. 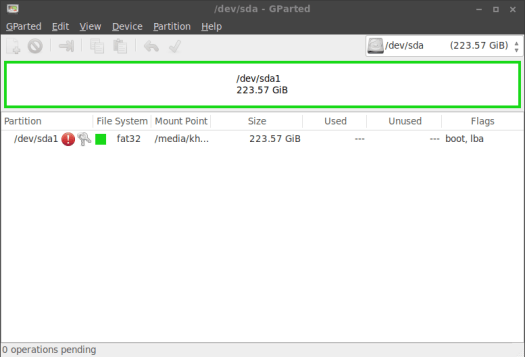 But I did notice the drive would unmount and remount itself from time to time and display would go blank and come back.

The display was completely off, so that looks like a power issue, so let’s power MINIX NEO S2 with via its USB-C input. Khadas Edge + Captain supports the connection of multiple power supplies with different priorities for each. At first, I decided to connect a 12V power supply to the DC jack of Captain baseboard and use the SBC’s power supply for the USB-C hub. For some unknown reason(s), the board would not boot. Finally, I went back to power the board via USB-C, while using my phone’s 5V/2A USB-C power supply to power MINIX NEO S2.

I could run iozone without issues on the SSD:

Read results were are expected at 373332 KB/s since in theory the SSD is capable of 400MB/s sequential reads.  Sequential writes were for whatever reasons limited to ~129 MB/s, but not rewrites, nor random writes.

I had another issue however, I would get no video output to DP-1. The port was still detected in Lubuntu, but my TV would show “no signal”. I tried to mix HDMI cable, connect the port to another TV, through an A/V receiver, etc.. but no luck. This is the output I got in dmesg while trying to reconnect HDMI via the USB-C port.

I did notice that both displays would show at the login screen, but as soon as I would input the password and click on OK, the USB-C video output would just go blank. In a last-ditch effort, I decided to boot the board first, then only connect the USB-C hub after login, and somehow it worked and appears to be stable.

If you pay close attention to the photo above, you’ll notice I connected the USB 3.0 drive as well and ran iozone and both the SSD and HDD at the same time. No problem at all with the displays, and storage performance (SSD: ~370MB/s; HDD: ~92MB/s).

MINIX NEO S1 & S2 USB-C hubs are specifically designed for Apple Macbook, Macbook Air, and Macbook Pro, but since they follow USB-C specifications they should work with compatible devices. You must note your experience may vary, as we’ve seen MINIX NEO S2 “works” with Khadas Edge running Ubuntu 18.04 + XFCE, but stability, at least with regards to driving an extra display may be an issue. An external power supply is almost certainly needed unless you only use the product as a USB-C SSD.

MINIX NEO S1 & S2 can be purchased on various shops including GearBest, GeekBuying, and Amazon starting at respectively $79.99 and $97.99.

The power issues you are seeing are probably a result of the hub failing to have adequate derating logic, power path controlling based on Source Capability/Request limits, and input load regulation. SSD are very “spikey” in their current draw, sometimes loading 3a+ spikes for microseconds during use. You’d need a high bandwidth oscilloscope with current loop to see this. That could be wreaking havoc with the output voltage regulator on your computer’s USB-C port, explaining the need for external power. (The USB-C spec specifies the max current slew rate.) Also if you’re connected to a weak source that only advertises… Read more »

Do you maybe know why all docks like that doesn’t allow custom cable to the host device? It’s always built-in cable or straight male usb-c plug. The only exception is upcoming hub from Sony but it’s not on the market yet.

Because having that would require the manufacturer to pay more for (a) an eMarked and SI qualified cable (b) code the USB-PD logic to probe said eMarker (to ensure someone didn’t plug in a USB2.0 cable without enoigh wires) and (c) pay for a DP and USB3.1 high-bandwidth rated retimer and mux chip (to flip signal paths depending on cable orientation). But to put it into perspective, most good-quality Type-C SoCs do (a) (b) and have (c) built in for free, and even (c) TCPCI compliant retimer costs maybe $.10 max. But that’s $.10 more profit the dongle maker could… Read more »

Thanks, appreciate your response. Before from my outside perspective I was guessing it’s to avoid problems/returns/low ratings with shady 3rd party cables. So I guess I will have to wait another year for my dream setup. I’m waiting since galaxy s5 heh. First for android phone with usb-c 3.x (that x another mess) later for portable HDD drives, card readers, hubs. Still waiting for nice hub – even the Sony one – just two slave ports – only one usb-c, about 11×5 cm. It has to handle 100w but still…sometimes I feel like the industry tried to eat to much… Read more »

Nice review. I was wondering about a sollution for multiple hdmi displays on SBC’s.
I don’t think any of my SBC’s support DP. (VIM3, VIM2, N2, NanoPi M4, RockPi4B, …)
Again something to look for in a next SBC.
Greetings, NicoD

If you’d like even more HDMI displays, the MINIX NEO C has two HDMI ports, but both ports show the same content. DisplayPort is less common. ODROID-H2 SBC does have HDMI and DisplayPort, and several industrial SBCs also have options for DisplayPort