After testing ODROID-XU3 Lite with Android 4.4, and finding a workaround to some HDMI issues, I could finally try out Ubuntu, or rather Lubuntu with LXDE instead of Unity, in Hardkernel low cost octa-core development board. I’ll start this review by explaining how to install and setup Lubuntu on the board, followed by running various program to test the system usability as a desktop computer with LibreOffice, Chromium, XBMC, and 3D graphics, and finally run some performance tests with Phoronix Test Suit, build the Linux kernel natively, and transcode a video with avconf.

Setting Up Ubuntu on ODROID-XU3 Lite

All firmware images for ODROID development boards, can be found on odroid.in website, and if you want Ubuntu 14.04 image, go to ubuntu_14.04lts folder, to select the latest firmware file for your board. The latest image for ODROID-XU3 (Lite) is currently ubuntu-14.04.1lts-lubuntu-odroid-xu3-20141105.img.xz, it’s the same for micro SD card or eMMC boot. You should have gotten a eMMC to micro SD adapter if you’ve purchased an eMMC module from Hardkernel.

You can download, extract, and flash the image with dd (Linux) or Win32DiskImager (Windows). For example. in a terminal in a Linux computer:

Where X is the letter of your micro SD or eMMC module inserted into your computer. Check the value carefully with lsblk before running the dd command, or you may lose your data stored on other drives connected to your computer,. For extra safety, you could also consider doing this procedure in a virtual machine, for example by running Ubuntu in VirtualBox.

Now insert the micro SD card or connect the eMMC module to the board, and you configure the boot switch between the Ethernet and USB ports as shown below using a pen or tweezers. For eMMC both must be in high position, whereas for SD card boot one must be down.

Now connect a keyboard, mouse, the HDMI cable, Ethernet, and/or other peripherals you may want to connect and power up the board by connecting the provided 5V/4A power supply. A typical boot should complete in around 22 seconds, although the first boot might take a little longer.

A this stage, the installation is nearly complete, and you should already have a usable system, however, if you’ll see that the rootfs partition is only 4.9GB with 310 MB available (that’s after installing LibreOffice):

Since my eMMC module has a capacity of 16GB, it would be nice to use all of it. Normally, you’d use fdisk/parted, and resize2fs  to get the full size, but Hardkernel provides ODROID Utility that can do just that among others. So click on the icon on the top right to launch the program, input the password (odroid), and after running apt-get update automatically, the following interface should appear. 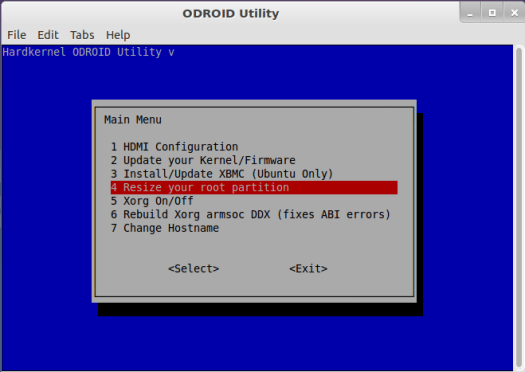 9.4GB available out of a 15GB partition. Perfect! The setup is now complete.

The Ubuntu image comes pre-loaded with Firefox, Chromium, Transmission, Arduino IDE, Abiword, PacmanFM, XBMC and a few others programs. Since they probably wanted to keep the image reasonably small, they did not install large program, but I install LibreOffice for a better office suite, and Nautilus for a file manager with Network Shares access:

The system is extremely responsive, and if you’re using a computer with a mechanical drive, ODROID-XU3 Lite will boot and load programs much faster than your full-blown Intel/AMD computer.

The best way to showcase ODROID-XU3 (Lite) capabilities is to shoot a video, so I’ve just done that showing:

Side note: Since my camera (Canon Powershot A2300 HD) is pretty poor at shooting videos of screens, I’ve used SJ1000 action camera instead as the image is much sharper, but there’s a fisheye effect due to the wider angle of such camera. There are some tools in Linux including Python scripts and KDEnlive that can remove the fishing effect, but they introduce some aliasing, which does not look nice in this type of video, although it’s probably acceptable for content without text or thin lines.

Based on these tests, ODROID-XU3 Lite can be used as a desktop replacement or an XBMC media center, but you have to be aware of some limitations:

For all other uses, ODROID-XU3 Lite is clearly the best ARM Linux platform, I’ve tried so far, with a fast eMMC, 2D/3D hardware accelerated graphics (for apps that support OpenGL ES only), and hardware video decoding.

Other Use Cases and Performance

Before starting some benchmarks, I’ll check what type of Exynos 5422 I have in my system:

BIN1 is for the Exynos 5422 processor clocked up to 2.2 GHz found in ODROID-XU3 board, and BIN2 is limited to 1.8 GHz, and normally found in the Lite version of the board which I’m reviewing right now.

Antutu is the most famous benchmark in Android, but in Linux, Phoronix Test Suite is the reference. It’s a bit more complicated to use than Antutu, but more flexible, and thorough.

It turns out the iozone test for disk I/O takes nearly five hours, and recently my computer tends to turn off randomly, and since I started the test from an ssh console, the test got interrupted, so I only ran encode-mp3, compress-7zip, and apache benchmarks which last only about 15 minutes in total.

Out of the three test, compress-7zip failed because of a lack of memory:

So the whole Phoronix benchmarks did not exactly work out as expected, but you can find the result for MP3 encoding and Apache tests @ http://openbenchmarking.org/result/1412146-LI-20141214131 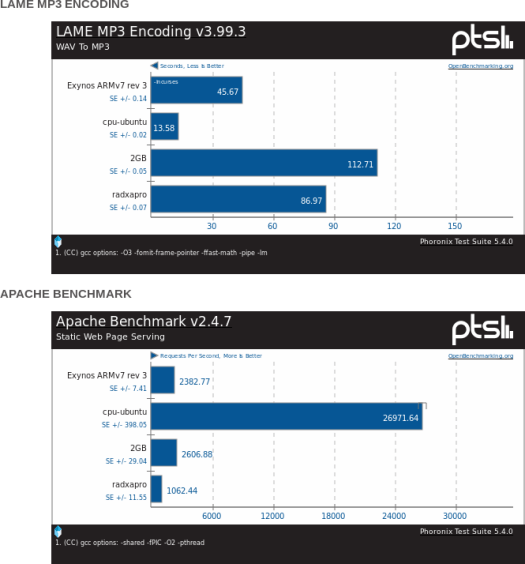 I’ve compared the ODROID-XU3 Lite results to some recent results on Openbenchmarking website including an Intel Core i3-4150 quad core system (cpu-ubuntu), an older Intel Atom N570 system (2G), and Radxa Pro board powered by Rockchip RK3188 processor. So Exynos 5422 can’t match a recent Core i3 processor yet (which by itself costs more than ODROID-XU3 Lite board), but does well against N570 netbook processor, and is about twice as fast as Radxa Rock Pro board in these two tests.

People may want to use this powerful low cost Octa core board in build farm, so I though it would be fun to try building Linux mainline kernel natively. Let’s installing dependencies, and get the source latest Linux release (3.18) first.

Ubuntu 14.04 comes with gcc 4.8.2 only, but this compiler will break Linux mainline build, so I had to install gcc 4.9 instead:

You’ll also note some ODROID boards are already part of mainline, probably with partial support, but unfortunately ODROID-XU3 (Lite) kernel has not been upstreamed yet.

Anyway, let’s build the kernel for Exynos processor, and see how fast the board can compile a Linux kernel:

So it takes less than 6 minutes to build the kernel on ODROID-XU3 Lite, about 4 times longer than on a powerful, but much more power hungry (300W) AMD FX8350 based computer. In other words, it should be possible to achieve the same performance as my computer using 4 or 5 ODROID-XU3 Lite boards in a mini build farm using distcc compilation for about the same price, but only a fraction of the power consumption, and of course native compilation has advantages over cross-compilation, since some tests may have to be skipped for the latter.

Finally, one follower on G+ asked me to test MPEG2 to H.264 video transcoding with ffmpeg. The latter does not seem to be available, and as been replaced by avconc, so I installed libav-tools instead, and ran the transcoding.

It took 2 minutes 31 seconds to encode a 44 seconds video, so real-time 1080p video transcoding is currently not feasible with avconv / ffmpeg.

Have said that, Exynos 5422 supports video decoding and encoding, so it should be possible to write a program using the MFC (Multi-Format Codec) driver for Exynos. I could not find any sample code, but having a look a XBMC source code for ODROID boards might be a start, since it’s using the MFC drivers for decoding.

ODROID-XU3 Lite can be purchased directly from Hardkernel for $99 + shipping, or through distributors like Ameridroid (USA) or Pollin Electronics (Germany). Adding an eMMC module, an HDMI cable, and the serial debug board to your order is recommended, although you could replace the eMMC with a fast micro SD card (class 10 or greater) for a still decent performance.

Cool stuff, did you try with the Performance governor?

As all ARM arch chips seems to have a delay (in the ms range) when it changes frequencies/voltages, that has a large effect on pretty much everything.

@anon
I did not mess with the governor, but it’s already set to performance.

Actual new Hardkernel Odroid Devices arn’t available at pollin.de for the last months….
wondering about it… and very bad thing in Front of chrismas…

Well done. Then now we can replace Android with Linux as daily OS connected to TV ? This is your suggestion ? Or Linux is better for a desk like Windows ?

Did you do any reviews of nVidia’s Jetson-TK1? I’m very curious how this performs compared to it on Linux.

Thank you very much for a great and detailed review. I will ask Santa to get one for Christmas 🙂

The Jetson TK1 got full HW acceleration up to 4K videos:
http://tuomas.kulve.fi/blog/2014/09/18/xbmc-for-tegra-with-full-hw-acceleration/
Some review on the Jetson TK1:
http://bitkistl.blogspot.co.at/2014/03/evaluating-jetson-tk1-board.html

@mark
If you just use XBMC, then you could also use Linux. However, if you plan on watching online videos such as YouTube, Android will be better. I think it’s also possible to watch YouTube with XBMC plugins, in that case it might be OK.

@adem
If you want an eMMC module, better buy from Hardkernel, and you’ll also get a micro SD card adapter for the module making it easier to flash the firmware to the card. I don’t think eMMC module are standard parts, but maybe I’m wrong.

Hi! Can you test webrtc video encoding with this board?
i mean chat with your PC or at least broadcast to your PC using chrome and webrtc?
here’s sample WebRTC link: https://www.webrtc-experiment.com/broadcast/
And thanks a lot for the review 🙂

@Roman
I’ll test a bit later. Note to oneself: works in Chrome, but not Firefox…