I think I’ve read stories about Rockchip RK3399 being clocked at 2.0 GHz with proper cooling, but it may not be reliable on all boards. RK3399K should fix that.

Rockchip actually updated its datasheet on the 29th of May, but I only found out about it today. Everything else looks the same, and you’ll be able to find out whether your device uses RK3399 or RK3399K by looking at the marking on the chip. 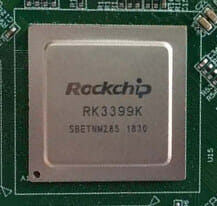 That’s all info there’s in the datasheet about RK3399K. A web search does not return any board or another hardware platform (in English) based on the new processor.

Instead, I learned about the new processor via Kobol. You may remember Kobol Helio4 DIY NAS powered by Marvell ARMADA 388 dual-core processor, and the company is now working on Helio64 nano-ITX board featuring Rockchip RK3399K processor @ 2.0 GHz with some interesting features. 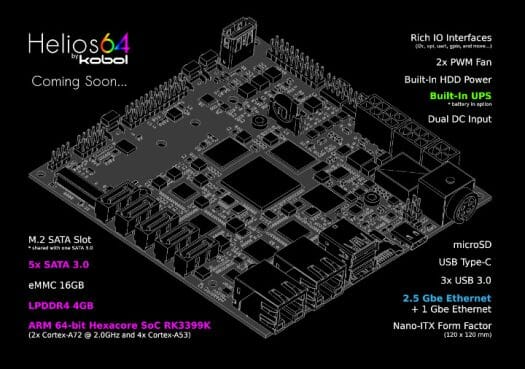 It will take a while before the board becomes available however, as I’ve been told the PVT (Production Validation Test) samples are expected sometimes in December meaning the board and/or NAS Kit will likely be available in the first part of 2020.

I could also notice an industrial computer and a system-on-module based on Rockchip RK3399K on some Chinese websites. Both products were apparently announced last year (2018), so the upgraded processor has been available for some time, but Rockchip may not have actively promoted this version until recently.

It’s interesting to see that they are stuck at this limit which is exactly the highest frequency in hertz you can express on a signed 32-bit int (2147483648 to be precise). I used to have exactly the same issue on the MiQi (RK3288) two years ago. Thus I don’t expect any muve beyond this limit for a while, until they figure where there’s a nasty signed vs unsigned limitation somewhere in the code 🙂

It’s a curious bord. I guess they are using 2 PCIe lanes for the 2.5 Gbe Ethernet and then only 2 lanes for the 5 SATA ports. Why the 2.5 Gbe though? It’s not exactly wide spread 😀 But I guess if you want to add SATA you have the choice of 2 or 4 lanes. And if you also want to add Ethernet you have to go with 2 lanes SATA and the rest for Ethernet. Maybe they could have gone with 1 Gbe and use only one lane and the last lane for something else? This board depends… Read more »

2.5Gbps is the “new” standard for prosumer hardware. Most mid to high-end PC motherboards are featuring 2.5Gbps now.
I’m curious what the SATA controller is, as there’s no five port SATA controller that I know of, so this must either be a four port and a single port or something else that I’m not aware of. It’s possible they use a port multiplier, but it doesn’t really make sense either…
My issues is with the form factor, there are no readily available nano-ITX NAS cases, whereas there’s a bunch of mini-ITX NAS cases. Talk about missing an obvious “feature”…

Wrt form factor: “We will sell a simple adapter kit in order for people to use Helios64 with any mini-ITX and ATX PSU” (this way low consumption will be impossible but hey…)

SATA controller could be a JMB585 which is a Gen3 x2 controller so OK for spinning rust but in combination with RK3399 (Gen2) definitely a bottleneck for SSDs.

But I don’t know how readily available these are elsewhere…

> But is there consumer network gear with 2.5 Gbe?

For testing purposes I have a MS510TX on my desk to be combined with RTL8156 USB3 dongles or Macs with their ACQ107 NBase-T network chip (2.5/5/10 GbE). With most use cases 5GbE or 10GbE bandwidths are more than enough (I only sometimes see 10GbE links with more than 25% utilization in various installations) while 2.5GbE links can and will be saturated even with use cases like ‘home NAS’.

Same cabling as with Gbit Ethernet but 2.5 times the speed. And no, you don’t get ‘almost the same’ with bonding as many hobbyists still think. And now with 2.5GbE gear that is not just castrated 10GbE equipment also consumption numbers are way lower compared to 10GbE.

Wondering how Helios64 implements 2.5GbE Ethernet… USB3 attached (RTL8156) maybe with an USB hub involved in between oder using a PCIe switch? The SATA ports will most probably be provided by a JMicron JMB585?

I think the RK3399 was initially announnced as 2.0+1.5 (that’s what we used to see everywhere) then when products actually started shipping it went down to 1.8+1.4, except many TV boxes announcing 2.2 of course 🙂 This SoC is not the most power-efficient thing on earth, but they probably managed to improve the yield quality and get way more samples running fine at 2.0. In my Neo4 farm, I finally limited the A72 cores to 2.0 (the performance difference on the A72 was not enough and they were cooking the A53 ones limiting their frequency while they do half of… Read more »

> I think I’ve read stories about Rockchip RK3399 being clocked at 2.0 GHz with proper cooling My understanding is that Rockchip did a chip selection after fab QA: Those RK3399 that were able to clock high at lower VCore voltages were sold as OP1 to Google for their Chromebooks, those that needed higher voltages to run stably became RK3399. The former ‘specified’ for 2.0/1.5GHz, the latter for 1.8/1.4GHz and both having their own DVFS tables with lower voltages for the OP1 variant which could then reach the higher clockspeeds while generating same amount of heat as the RK3399 variants… Read more »

At least the M4 can be powered via their hats. They even introduced a “power hat” 😀
https://www.friendlyarm.com/index.php?route=product/product&product_id=256&search=psu&description=true&category_id=0

The USB-C connector works way better for me than the older micro-usb jokes. Type-C connectors are rated for 3A under 5V, which means dropping no more than 0.25V there. They comme with 4 times the number of power lines as micro-usb so the situation improved a lot. I think most remaining issues is with users having poor power supplies, “rated” at 2A/2.5A while dropping voltage to less than 4.5V under such a current. The real issue then is for users who can’t check this by themselves and who run into trouble when connected to their $2 phone charger :-/ Edit:… Read more »

Doesn’t change a single bit that SBC users grab a very long USB-A to USB-C cable and connect a crappy PSU (either providing 5V or 4A but never both at the same time) with their board and suffer from freezes and crashes.

With the M4 users actually have to show some PSU diligence, as most usb-c PD PSU’s will not power the M4 due to lack of basic negotiation skills in the M4.

> My understanding is that Rockchip did a chip selection after fab QA: Those RK3399 that were able to clock high at lower VCore voltages were sold as OP1 to Google for their Chromebooks, those that needed higher voltages to run stably became RK3399.

That’s correct — there’s stock-vs-OP1 binning, and the OP1 chips are marked accordingly on their lid.

No ECC? That was the novel detail with the Helios products. Without ECC I’ll stick with my M-ATX Gemini Lake board with a cheap LSI SAS2008 reflashed board. 10 total ports for my spinning rust.

> No ECC? We will offer an ECC option. The Rockchip RK3399 SoC itself doesn’t have a memory controller that has ECC feature, however we are currently working with a SDRAM vendor that now offer built-in ECC feature inside the SDRAM directly. It’s not impossible it will be available on day one So there will be an option with on-die ECC LPDDR4 which is not that surprising since JEDEC already said a long time ago that with future fab nodes ECC will be optional/mandatory with mobile DRAM … and it also helps with power consumption — see for example: https://www.micron.com/-/media/client/global/documents/products/white-paper/ecc_for_mobile_devices_white_paper.pdf… Read more »

Does on-die ECC report error conditions back to the controller at all?

> Does on-die ECC report error conditions back to the controller at all? At least not with an RK3399 or any other memory controller that is not aware of ECC. Single-bit errors get corrected on the fly without the host even noticing and double-bit errors result in the same we see today with single-bit errors on non-ECC memory: ranges from nothing over data corruption to application crashes to system freezes depending on where the bit flip happens. JEDEC talked 5 years ago about ‘on die ECC’ ‘for future DRAM process (vendor specific / transparent spec). I guess this on-die ECC… Read more »

Ok, I misread you original post then — I thought you meant it could, and I was wondering if some obscure JEDEC protocol allowed that on LPDDR4.