We missed the release at the time but caught up as LG just released a minor update with webOS OSE 2.1 a few days ago that adds a Japanese keyboard, uses journald, and provides various fixes and improvements.

Some of the new features of webOS OSE 2.x include:

webOS is generally known as an operating system for televisions, but the short changelog above makes it clear the company also targets the automotive industry. 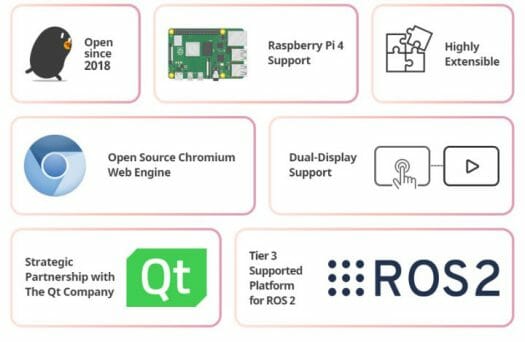 Liliputing also notes that webOS was originally designed as a smartphone operating system developed by Palm, and then HP which added support for tablets. LG has all but given up on webOS for smartphones or tablets, but there’s a community project called LuneOS that keeps it alive, notably with efforts to port it to PinePhone Linux phone.

Back to webOS OS 2.x. So how can you try it out on your Raspberry Pi 4? Unless I’m mistaken there aren’t any binary releases, and instead, you’d need to build the image from source. If you don’t own a board, you could alternatively run webOS OSE 2.1 in the emulator part of the SDK. You can follow the getting started guide to try it out on either platforms.

What we really need is Kodi support for webOS.

If meant for phones, then a tablet version for TV boxes?

Now that will get down voted!

you forgot to mention that they drop RPi3 support from WebOS 2.X.
looks like due to ram requirement.
https://www.webosose.org/docs/guides/setup/system-requirements/#for-webos-ose-2-0-or-higher

What about the good old trusty oDroids? There is no mention of them anywhere. It is the first time I am hearing about WebOS OSE, or at least the first time it caught my eye.