Raspberry Pi 4 launched last June with a lot of buzz as it offered much better performance, more memory, and faster I/Os compared to Raspberry Pi 3 model B+.

Benchmarks confirmed the improved performance but also revealed a heatsink was necessary to ensure optimal performance under heavy loads.  Some companies also launched an oversized heatsink+fan combo for the board, but it’s really over the top and absolutely not necessary unless possibly in higher room temperature (50°C?).

The Foundation has now published a blog post detailing all the work they have done to improve the thermal performance of Raspberry Pi 4 during the four months since launch. They wrote fairly long post, so I’ll provide the main takeaways.

They stress the board with stress-ng (CPU) and glxgears (GPU):

It should be noted that glxgears utility relies on OpenGL, and most Arm GPUs use OpenGL ES, so it’s quite possible several of the commands were emulated on the CPU. es2gears might have been a better choice since it uses OpenGL ES APIs only. I’m not sure how much that matters on the VideoCore V GPU in the Broadcom BCM2711 processor.

Five firmware versions have been launched since the launch of RPi 4:

If you want to make sure your Raspberry Pi runs the latest firmware, run the following commands:

And now the results with the Raspberry Pi 3 B+ as reference, and Raspberry Pi 4 with different versions of the firmware. As I understand it the boards were not fitted with a heatsink.

There’s been good progress with idle power consumption dropping from 2.89 Watts at launch to 2.10 Watts with the beta firmware, and from 7.28 Watts to 6.41 Watts under load.

The second chart shows how long it takes for the system to throttle under CPU and GPU load. Raspberry Pi 3B+ started to throttle after just 19 seconds, while Raspberry Pi 4 would do so after around 60 seconds at launch, now it takes close to 180 seconds before throttling. If the board is placed vertically however cooling improves a lot with the idle temperature dropping by 2°C, and it takes over 400 seconds before throttling. 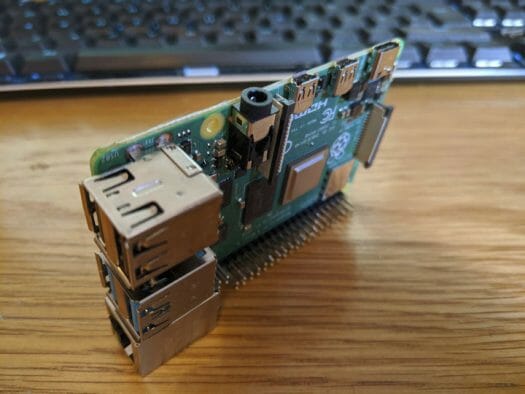 Testing was completed with a real-life test, as opposed to the synthetic tests above, that consisted of building the Linux kernel on both Raspberry Pi 3 B+ and Raspberry Pi 4 with the latest beta firmware:

It should be noted that there was no mention of room temperature as it may affect throttling quite a bit, and if your board is inside an enclosure results will vary depending on the case design, and again room temperature.

So in essence without a case it will be working soon?

There is no ‘essence’ available since Gareth Halfacree managed to mention the word ‘performance’ almost a dozen times but didn’t had a look a single time whether each of the various ThreadX updates had any impact on performance (ThreadX is the primary operating system controlling the hardware on any RPi). He used load generators in the most primitive way and looked only at clockspeeds. Impressive…

Well those powerful SoCs typically require a heatsink to operate. When was the last time your x86 operated without a heatsink? Maybe 486 or Pentium era before MMX?

True, but which embedded x86 board is sold without heat sink /fan ? The RPI foundation should swallow their pride (and price) and add a good heat sink standard: nobody is unfailable.

>True, but which embedded x86 board is sold without heat sink /fan ?

Galileo doesn’t have a heat sink or fan.

Usually if you need a heatsink or fan the manufacturer lets you know this fact and most importantly also provides a mounting concept.

My UK101 (Ohio Superboard2 clone) didn’t have a heatsink on the CPU, nor did my Commodore Amiga 500. I recall how a key selling point of personal computers was they were quiet and didn’t have the huge cooling requirements of mainframes.

So another load of fud… It almost sounded too good to be true, from just skimming over.

Even cheap devices won’t be limited through IOPS or bandwidth in a (few) couple of years on user profile browsing or multimedia tasks. Avoiding hot pcb keeps being a challenge, maybe.
What is our responsibility for power savings (on server types and consumer side load balancing: AI optimization)? That might be a bigger question.

Sorry, but that’s just hilarious that physics works like this

Most important for me is that the latest beta firmware adds HDMI power off for those of us using a pi4 as a desktop.

With the heat control and standing it vertical, you are most of the way to building a talkie toaster.

Preliminary conclusion from my side (as someone who is only interested in ‘light server’ use cases): Since I need storage performance I reverted the USB controller’s firmware back to the initial version vl805_fw_013701. I use the latest beta ThreadX release (called firmware in RPi land) and opted for a slight ‘overclock’ to 1750 MHz: over_voltage=2 arm_freq=1750 12 over_voltage=2arm_freq=1750 Then tested USB3 storage performance again which looks pretty good (especially random IOPS are good again — and this even with ondemand cpufreq governor which helps reducing idle temperatures and consumption): ondemand random random kB reclen write rewrite read reread read write… Read more »

ThreadX is a binary blob owned by Microsoft and Broadcom, so when do they release it under an open source license?

Express Logic got bought out by Microsoft for an undisclosed sum of money at the beginning of this year, tkaiser…

Now, I’d believe that Broadcom doesn’t own it, but is paying royalties to the owner of ThreadX there.

There’s a distinct difference with having a Source License and not paying Microsoft. The presumption is that there is no code concerns, which is a bit different than mine and many others’- which is I’m paying Microsoft money per each Pi, period. Even with a source license, there’s typically a per-unit cost that you still pay the vendor on the royalties side of things. With GPL, it’s merely compliance as they remuneration. In this case, I’d rather not be beholden to them…or to someone paying money to maintain the fork, which is what this is.

>so when do they release it under an open source license?

If they intended to ever release the code why would they have used an RTOS that they can only ship as a compiled binary?

Because they never intended to Open Source anything at the times these cores were designed. They were intended for set-top and varying Android original task sets for business customers. They had a bit of a change of heart over time since that time. Having said this, I’d think they’d re-think the RTOS and re-work the VC-IV/VI firmware to be something comparable to the current and use Zephyr, FreeRTOS, etc. there instead. Definitely lower licensing costs (It costs Broadcom per unit for this…)

Releasing the source might actually endanger millions of existing installations if static analysis tools or security experts found bugs in the code. It’s always the case when commercial code has been leaked. RPi foundation does not want to increase the risk of existing user base with shortsighted opportunism. Future RPi versions might run a completely free firmware, but it needs to be started from scratch like the VC4 GL driver.

“It should be noted that glxgears utility relies on OpenGL, and most Arm GPUs use OpenGL ES, so it’s quite possible several of the commands were emulated on the CPU. ”
The GPU is capable of OpenGL 2.1 and OpenGLES 3.2.
We’re talking about glxgears here, it’s not exactly Crysis. Even if there were emulated OpenGL calls it would have been unlikely to hit them.

How about a passive heatsink…?

theguyuk
Nobody Of Import

That is what they tried to do with the heat spreader top.