UNISOC has launched a new processor for AIoT (Artificial Intelligence + IoT) applications with V5663 dual-core Cortex-M33 processor, supports for dual-band WiFi 5, Bluetooth 5.1, and audio features such as a voice activity detector and microphone array support which should make it ideal for smart speakers, and other smart audio applications. 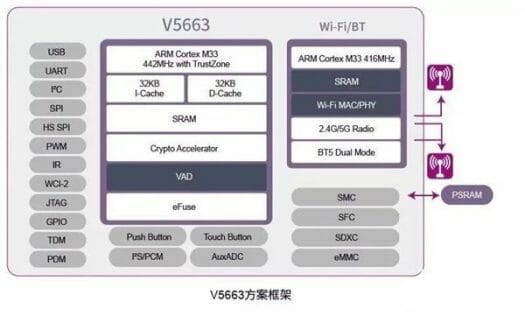 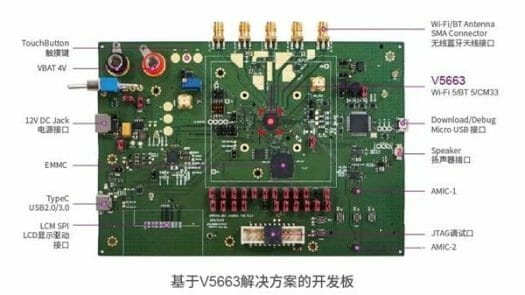 The company also designed a V5663 evaluation/development board with five antennas, two built-in microphones, a speaker connector, a USB-C interface, and an SPI LCD interface, plus some touch buttons. Power appears to be delivered either through a 12V DC jack or external 4V battery.

UNISOC also worked on AILIGO development framework for the processor/board and will launch a community in the next few weeks. The framework is based on an RTOS (FreeRTOS?) with a communication stack, audio library and driver, power management. and so on. 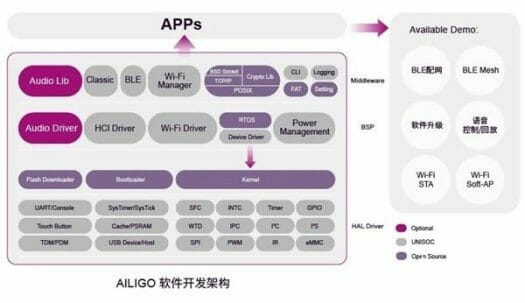 The diagram above also reveals several Bluetooth and WiFi sample code/demos will be part of the SDK. Somehow the audio libraries are optional, so they may charge extra for those, and it also looks like only select components will be open source.

There’s no product page that I could find at this stage. It’s not the first WiFi 5 + Bluetooth 5 processor from the company, as we previously covered IVY5661 board following 96Boards IoT Edition specifications.

It is an overgrown ESP32. They should market it like one.

true. Question is: Will it be as cheap as the ESP32?

>It is an overgrown ESP32

mm not sure on that. On paper it looks a lot more capable and less weird than the ESP32.

Yes, it *looks*. But what makes ESP32’s success is its widely available SDK associated with cheap & small modules that are easy to integrate and program in field.

The SDK will be a train wreck like they all are but the specs of the hardware *seem* much better than the ESP32. It seems to be trying to fill the spot where an MCU is a bit wimpy but something like a i.mx6ull is too expensive. FYI Marvell IoT SDK, Cypress’ WICED SDK etc are publicly available. You can’t really get parts to run them without having access to the NDA’d versions of them so it’s basically useless. It would be interesting to see how the sales numbers for the ESP32 modules compare to something like the Murata type… Read more »

Espressif is a publicly traded company with a market cap of over $2B. Based on their revenue numbers I suspect they are selling around 500M ESP32s in a year. Most of these sales are inside China.

I suspect a new non-name company like Espressif was a few years ago for most of us has more chances to succeed in this fast moving than a well established one like Marvell, Cypress, Realtek or any other one, just because 1) they can dedicate 100% of the effort on a single direction, and 2) all you need to remember to spread the word is either the company’s name or the chip’s short name (since the company has few products). Assembling a community around a new techno really requires something that is extremely easy to identify. Espressif succeeded in this… Read more »

>I suspect a new non-name company like Espressif I think most of the points you make apply for the maker/hobbyist segment but not for the general industry outside of China. >I didn’t even know Marvell did IoT They canned it a while back. NXP has bought their wireless stuff now too so Marvell are totally out of the game. >in order to be certain you will pass your way and never have the >ability to fix their bugs to make their products better). Nope. They provided the whole SDK source to customers apart from some stuff like homekit. I fixed/reported… Read more »

The Cortex ‘M3’ in the first paragraph threw me off. Of course you meant ‘M33’.