Many products are launched via crowdfunding campaigns, and in theory, both the business and end-users benefit from the opportunity. It helps companies evaluate the demand before committing to large expenses, and reduce their financial risk, while end-users pledging in a crowdfunding campaign will be the first-ever to get the product, and often at a significant discount compared to the eventual retail price.

But the flip-side is that they are risks for backers, they did not just buy a product online, but bet on the developers to deliver the products. Sometimes the project fails due to incompetence, unexpected challenges, or even fraudulent behavior from the developers. I remember one project where one of the developers just decided to buy a house with the funds raised instead of developing the promised 3D printer. 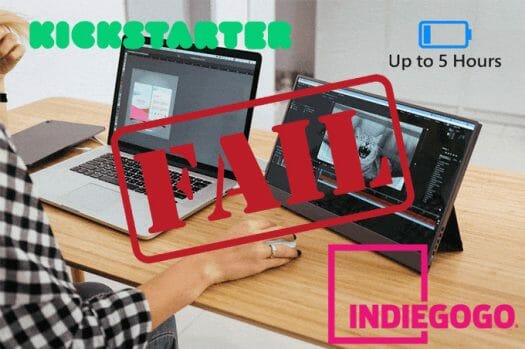 I was reminded of this important point by email this morning, as I covered TAIHE Gemini 15.6″ full HD or 4K portable display last year, with the project ending up raising over one million dollars from around 3,600 backers on Kickstarter.

Sadly, it did not end well, and it appears most backers did not receive anything and at least some who did, received a defective unit. The company stopped writing updates with the last one entitled “Update after a period of silence” being dated October 8, 2019, and the website trytaihe dot com is now offline. 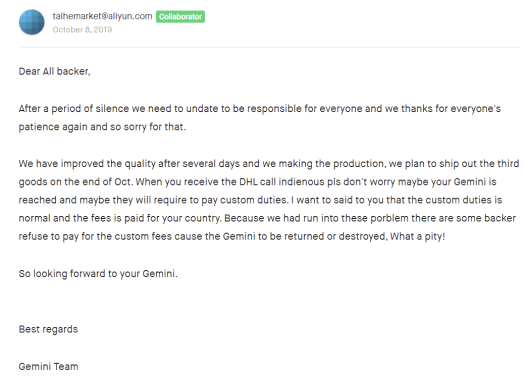 We can also see a long list of complaints in the comments section of the crowdfunding campaign.

I have sent numerous emails re not receiving my order nor being able to submit the survey. I am requesting a full refund.

I invoke my rights under Kickstarters terms of use https://www.kickstarter.com/terms-of-use/

Don’t lie to people. Don’t post information you know is false, misleading, or inaccurate. Don’t do anything deceptive or fraudulent.

* they’re able to demonstrate that they’ve used funds appropriately and made every reasonable effort to complete the project as promised;

* they’ve been honest, and have made no material misrepresentations in their communication to backers; and

* they offer to return any remaining funds to backers who have not received their reward (in proportion to the amounts pledged), or else explain how those funds will be used to complete the project in some alternate form.

Some will try to recover their money, but it will be hard, as the police are limited to what they can do, especially when international money transfers are involved, the cost of recovering the funds are just too high, due to the legal work, translations, and intergovernmental communication needed. The funds raised on Kickstarter probably went to China a long time ago, and even lawyers won’t be able to help due to the low amount per victim, and complexity of the case.

Kickstarter is an intermediary, so there’s little they can do once the money has been released. However, they do have the incentive to avoid this type of issue occurring too often, as many of the victims in the Taihe Gemini display case will never use a crowdfunding platform again.

The risk is especially high when a company was just set-up for a given project, as they can just close with little to lose if something goes wrong. If they have existing products and an existing customer base, they’ll be more inclined (and financially capable) to take a temporary hit and reimburse their backers for the long term viability of the company.

So it’s best to treat any pledge to a crowdfunding campaign as a small investment that can go down or up as a stock would, or simply be patient and wait until the product retails.

Just do not trust Chinese projects – they often resell existing products from the Chinese market. This “display” is one of the fakes.

I do blame those platforms, because even when users do massive complaints about specific projects that are scum, then the platforms instead of closing down the project and prevent new backers to pay more money, they continue having the project funding active so they get more money. For example, this project here: https://www.kickstarter.com/projects/pighixxx/abc-basic-connections-the-essential-book-for-maker/posts/2230626/comments That was a failed project and a scum and at the same time there was an active funding (maybe there is still). So when users start sending complaints to indiegogo, they just reply with a random message and ignore hundreds of people. It’s sad for the makers… Read more »

Yes, sometimes. I have invested in 13 Kickstarters and gotten my product every time. Sometimes there were delays with software but overall I got the product as advertised. If it sounds too good to be true them it may not be worth investing in.

The Sinclair handheld comes to mind.
The best solution is that campaigns should be made to have valid liability insurance for failed delivery on time of product.

Kill the walk away and forget it campaigns.

At least they shipped a few of those. Some projects seem to have been just money funnels from the very start.

I got stiffed on a product a few years ago that was supposed to allow me to overlay content on a HDMI stream. I got the device but it never worked.

Sometimes? With absolutely no accountability from the platforms themselves (i.e. we’re just a venue, we’re not responsible if someone steals your coat! Doesn’t matter we hired someone to steal it…) it happens a whole lot more than “sometimes.” You only hear about the big ones, there are plenty of smaller projects that just kind of fade away when the creator figures out it takes a lot more than $15,000 to change the world. My favorite, and one I backed and got burnt on: https://www.indiegogo.com/projects/wedg-the-personal-cloud-you-re-still-waiting-for#/ Another backer was able to purchase the domain after the creator abandoned everything, and sh*t all… Read more »

Here is an example of a project that violated Section 3 throughout the course of the whole fiasco-ridden project, and look at the backers’ frustrated comments
https://www.kickstarter.com/projects/smachteam/smach-z-the-handheld-gaming-pc/comments
Keep missing their shipping dates again and again.

Similar experience here.
I funded librecomputer “La Frite” on kickstarter, but they never delivered the promised Android image.
I understood from others that the wireless mezzazine boards were also not delivered.
And their earlier campaigns also yielded lots of complains. Hope to see them never again…
Actually this was my first kickstarter funding and as such a very bad experience.
I’ll definitely be more hesitant to back a project in the future.

That’s why I’ll never give money in advance for anything. This system started broken and complaining about something when you know the risks…

TAIHE Gemini project may still be alive after all… Backers have received the following email: Hello everyone!I would like to tell you how are you all right after the epidemic rages!With a heavy mood, come back to the computer to update for everyone.It’s almost 12 months since the last update. We are really sorry for that, but we’re still here, and there’s no such thing as “We ran away”. First of all, we responsibly tell everyone that we won’t run away, We will continue to post updates to everyone to inform us of our developments.Since the last update, due to… Read more »