A while ago, I was informed three new Marvell processors had made it to mainline Linux, namely CN9130, CN9131, and CN9132, but at the time, the description was a bit cryptic:

No other public information was available either, but Marvell has now published more details and those are OCTEON TX2 Infrastructure processors with four Cortex-A72 cores @ 2.2 GHz, up to 18x SERDES IO, and 10GbE. 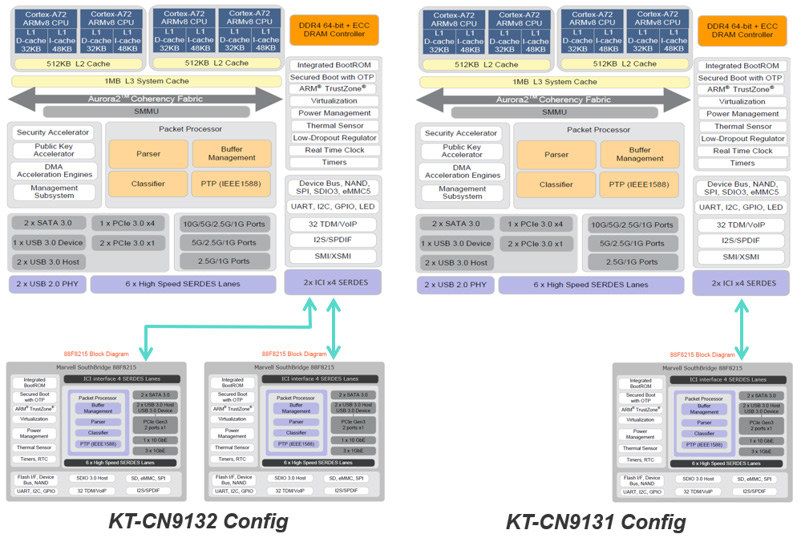 CN9131 and CN9132 add respectively one and two 88F8215 bridge chips that doubles and triples I/O’s (PCIe, Ethernet, USB, SATA and SERDES) compared to CN9130 processor. The CN913x dies are all integrated into a single multi-chip module (MCM) package comprised of an application processor (AP) and one or more Southbridge (SB).

The processor are expected to be found in 5G base stations, network and security appliances such as firewalls or routers & gateways, as well as IoT/edge servers, enterprise/SDN switches, and various networked storage solutions.

More details can be found on the product page, as well as a recent press release also covering Octeon Fusion CNF95xx SoCs built around Octeon TX2 processors and designed for “4G and 5G layer 1 baseband processing”, as opposed to “Layer 2 and 3 transport and control plane processing” for the processors covered in this article.

I read yesterday Marvell and Samsung are extending their collaboration to encompass infrastructure across additional segments of the radio access network. The companies have collaborated on baseband and transport processing solutions for base stations based on Marvell’s Octeon and Octeon Fusion processors. Have not a clue if the SoC in the cnx software article are used.

For me these essentially look like rebranded and slightly improved Armada8040. The higher frequency may justify the switch from AP806 to AP807, but overall it’s the same. We’ve never seen the 8080 that was supposed to come with 8 cores, I suspect they were busy with the Cavium acquisition. But it’s clear that they seem to be killing the Armada product line in favor of the Octeon one, even if they mostly take the Armada technology and the Octeon brand. Probably that the latter is more known in the enterprise market and that it makes sense to use this name… Read more »

Just a remark: CN913x is their smallest SKU (and an AP806 in essence). They have actually new armv8.2 SKUs with up to 24 and 36 cores, respectively. Check their portfolio at https://www.servethehome.com/new-marvell-octeon-tx2-and-fusion-cnf95xx-5g-socs/

Good catch. So they kept the Armada line for the entry level and used the Octeon Tx for the high-end, and are selling all of them under the same name. Some may experience some surprises however, because while the Armada series works out of the box in mainline kernel, I don’t think it’s even yet the case for the octeons. I also seem to remember that the octeons (called armv8.2 here) do not support 32-bit nor thumb, which means that developing on the entry level hoping to switch for production will not necessarily be helpful considering that you can discover… Read more »