[April 6th update: The article was updated to reflect Fraunhofer invented the technology]

There are plenty of LPWAN (Low Power Wide Area Networks) standards designed for low power, low bitrate and long-range connectivity with the most popular currently being NB-IoT and LoRaWAN. But Texas Instruments has joined other smaller companies (Fraunhofer, Ragsol, STACKFORCE, WIKA…) to form the MIOTY alliance in order to develop and promote a new LPWAN standard operating in the sub-GHz range called MIOTY. 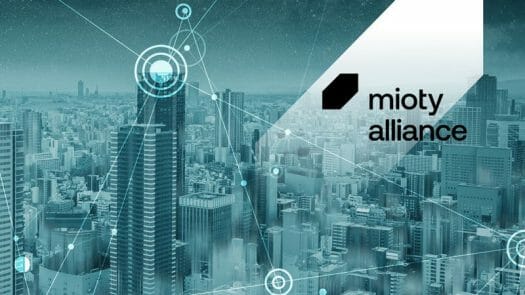 Texas Instruments explains MIOTY was born due to a lack of scalability and robustness (interferences issues) of current LPWAN solutions. But just like other similar low power WAN standards, it aims to support long-range while achieving long battery life, but MIOTY is also supposed to help IoT developers mitigate performance degradation in high-node-count networks.

MIOTY works in the same license-free bands (868 MHz, 915 MHz …) as LoRa radios with no costs involved to use the radio spectrum. The solution offers a star network for low-power end/leaf nodes, as well as a gateway solution for cloud connectivity. Currently, companies have to set up their own private networks, but eventually, there may be third parties offering network solutions.

LoRaWAN only works on chips developed Semtech, while Sigfox also relies on proprietary solutions, but MIOTY physical layer (PHY) and media access control (MAC), but MIOTY is based on a standard from the European Telecommunications Standards Institute (ETSI), namely TS 103 357 “Short Range Devices; Low Throughput Networks (LTN); Protocols for radio interface A “, which can be downloaded free of charge.

Texas Instruments CC1310 Cortex-M3 microcontroller, released in 2015 with the promise to offer up to 20 km range, 20-year battery life on a coin cell, just happens to be compatible with MIOTY standard, although the company also mentions MIOTY was tested on two other silicon providers. At the time of writing, I was unable to find out who the other two are. Other compatible chips from TI include CC1312R and the CC1352R Cortex-M4F WiSoCs with the latter also supporting Bluetooth Low Energy.

Back in 2018, Canada based BehrTech partnered with Fraunhofer IIS to commercialize the solution, and the key ingredient for robustness (resistance to interference) is Fraunhofer IIS’ patented Telegram Splitting technology that split messages into several packets to increase immunity to interference. A whitepaper quickly explains the history of MIOTY standard:

MIOTY by Fraunhofer Institute for Integrated Circuits (IIS) was adopted by European Telecommunications Standards Institute (ETSI) as Low Throughput Network (LTN) family Telegram-Splitting Ultra Narrow Band (TS-UNB) [5], which is based on Gaussian Minimum-Shift Keying (GMSK), a variant of FSK. The nominal range is 15 km and the battery lifetime is stated as up to 20 years. So far only one company, Behr Technologies, is commercially marketing MIOTY technology; on the gateway side they use an SDRplay RSP1a  Software-Defined Radio (SDR) chipset with proprietary userspace libraries.

The 2018 video below quickly explains how that all works.

One way to get started with the new standard is to get TI LPSTK SensorTag kit.

Okay, let’s see where this is going. Could be potentially be more interesting than lora. But there is a long way to really cheap modules and a good infrastructure. They also need something like TTN.

Patents are the nail in the cofin.

Agreed. The only benefit they provided was pushing the need for license free codecs.

“It could be that your purpose in life is to be a warning to others.”

What’s really needed is support for mesh (not star) topology, or at-least a hop-on repeat function. Without this, building out infrastructure is expensive.

“…they use an SDRplay RSP1a Software-Defined Radio (SDR) chipset with proprietary userspace libraries.”

I think the SDR1a uses off the shelf chips. I’m working frpm vague memory bit I think the IQ RF chip is made bt Mirics, the ADC is made by ADI, and the USB interface can be made by anybody.

Finally, Telegram Splitting is encumbered by a Fraunhofer patent.

Here’s a MIOTY intro YouTube video (in German) from Fraunhofer IIS that’s dated Mar 10, 2016. So yeah – while the MIOTY Alliance might be new, the technology has been around for awhile.

BEHRTECH of Toronto makes a LPWAN system called MYTHINGS that looks the same as MYIOT (both are based on Fraunhofer’s Telegram Splitting – Ultra Narrow Band [TS-UNB], ETSI TS 103-357). BEHRTECH puts out a report titled “MYTHINGS vs. LoRa, A Comparative Study of Quality-of-Service Under External Interference, Conducted by Professor Dr. Thomas Lauterbach.” Supposedly you can download the report here: behrtech.com/resources/lora-vs-mythings/ Unfortunately I could not get the BEHRTECH form you must fill out before you can download the report to work. Also, the form demands FAR too much personal information! (Talk about sales prevention.) So I did a web search… Read more »

Drone: I don’t want to be disrespectful but I think that you are missing the point here: I went to the Company link that you referred to above and was asked to provide my name, email address, phone number, job title and Company. Having nothing to hide, I provided this information and 10 seconds later had the report in my inbox. If I am not interested and they contact me, I know that I can handle the follow up sales call. Now you as Drone may want to remain completely anonymous and that is your choice but Drone is not… Read more »

I think he may have Droned on.