If I had to install some equipment at home were the mains are not easily accessible or would result in long cables, I’d immediately think about issuing solar panels to charge a battery, and discard the idea of using a wind turbine since in my mind those are really large and need to be fitted to a tall pole to be effective.

But I’ve recently come across a relatively compact wind turbine that generates up to 800 Watts and outputs 12V to 24V DC. 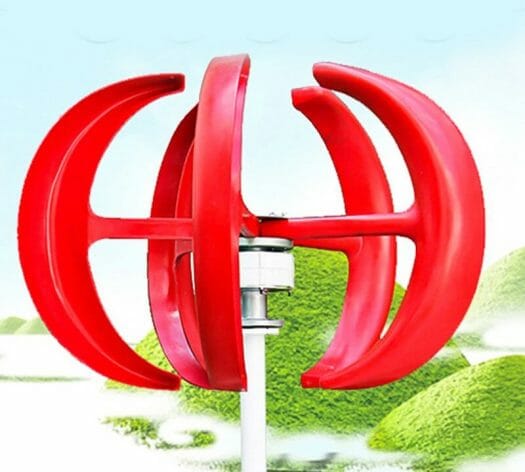 Those are the specifications for the model I found on Banggood ($295.99), and I have to admit with a 1.35m diameter, it’s a bit larger than I expected from seeing the photos. But there’s also another model on Aliexpress ($233+), that looks virtually the same but has a windwheel with only 90cm diameter and a weight of 8.8 kg. It’s rated power is 500W, and max power 800W. 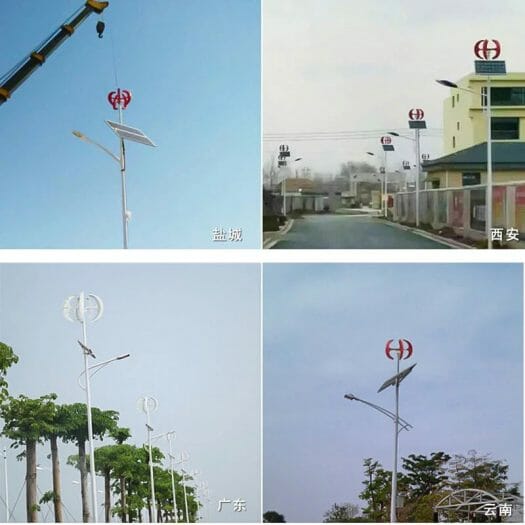 The wind turbine is used to power appliance that requires a fair amount of power, and the photo above shows it installed together with solar panels to power city lights in various cities and provinces in China. But it would be an over-the-top – and expensive – solution to charge a battery powering a single board computer for example. I suppose such a compact wind turbine could also be placed on a rooftop or hill with a smallish pole to power a base station or other equipment.

Interesting device to cover. I liked it, though. Thank you.

These devices are made for intensive use. It would be nice if they’d also build low-power devices for people like us who just expect to recharge batteries to power an SBC, something in the range of 20-40W, something that would seem totally possible in 30cm diameter using this technology.

There are even smaller ones at 10W, but it would probably be too small to charge a battery for a typical SBC.

For having experimented with home-made wind turbines involving motors a long time ago, I’m having doubts on the fact that such an apparently small device made of a regular motor would be able to deliver 1.6A under 12V at moderate wind speed. It looks like a regular DC motor as used in portative drills, it would need to turn very fast to produce anything concrete. Unless it’s really built for this specific usage of course. But otherwise yes, I think the size is correct.

Please keep in mind, that all those numbers are for ideal circumstances. In most cases you will get half of what is announced or even less. In addition to that, battery will be absolutely mandatory to cover windless periods. Given that in active times you will need to feed device AND battery, you will need to count for both of them.

Sure but even much less than that is not easy without gears to reach a high enough speed (which don’t seem to be present on the photo). But I’m sure the type of motor counts a lot, for example stepper motors seem to provide much better performance at low RPM. I think the number of poles, or the frequency at which the polarity is reversed, is what counts the most. Maybe their photos show motors designed for this, but they looked like drill motors to me!

As for revolution speed of motor shaft – it would be too optimistic to omit some gears from equation to achieve proper RPM.

How’s the weather sealing? As you can see, there are holes in the chassis, directly exposing the coils and bearings. Not good.

Maybe they’re designed to work only in full sun, in locations where solar panels would also work 🙂