Cooler Master, known for its PC cooling solutions and cases, has now launched a Raspberry Pi 4 case on Kickstarter. 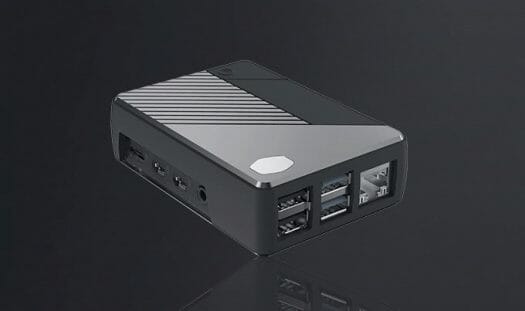 The aluminum case is unsurprisingly a fanless design and exposes a power button to easily power on and off the system without having to remove the power source from the Raspberry Pi. The button also happens to be reconfigurable to any other function so you can run whatever script you please after pressing the button.

The neat part of the design is that GPIOs are re-routed to the side of the case with corresponding IO markings on the enclosure. The case also comes with a slit to allow both display and camera cables to be routed outside the enclosure, and the enclosure design is made in a way not to interfere with WiFI or Bluetooth signals.

Since several stretch goals have already been met Cooler Master’s Raspberry Pi case will ship with wall/VESA mounts, a free 5V/3A PSU (for pledges with Raspberry Pi 4),  and the 3D model for the Pi Case 40 will be published and downloadable for free to anymore. 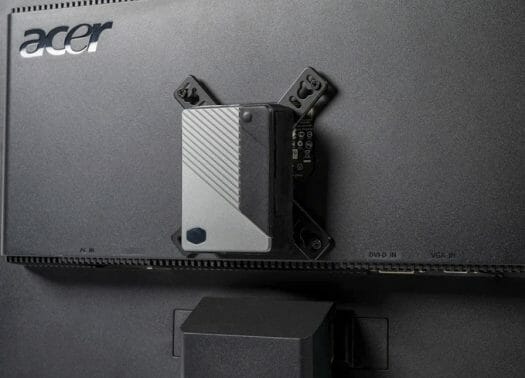 If you don’t already have a Raspberry Pi 4 SBC, you may also consider a bundle with Pi Case 40, RPi 4B 4GB RAM SBC,  wall mount brackets, and power supply for about $84. Worldwide shipping adds about $6, and backers should expect their reward(s) to ship in September right after the end of the campaign.

$80 – $55 = $25. Quite pricey. But I like how beautiful and usefulness this case, like solid cooling block for transferring heat, GPIO pinout legend; and at the end, will open the schematic.

The price is still on the edge of being reasonable for a good passive case, and the power button and VESA mount add some value. It can get even more absurd, like this one:

I expect most or all of these cases will also fit Raspberry Pi 5 in a couple years, but it’s just a guess.

A few minutes ago there was 1 early bird case available (25% off), probably because someone cancelled theirs. But it’s gone now.

Geez, and here I am making a custom aluminum water cooled case for the pi that’s about 3x the price thinking it’s reasonable.

Curious, what warranty do Rpi give on 2GHz over clocked Rpi 4 ?

Do they have any warranty on the non-overclocked version?

Who cares? The RPi is a consumer product. I can buy it everywhere and if it fails at least in the EU I get a replacement or refund within a certain amount of time (it’s 12 to 24 months).

No seller cares about the contents of /boot/config.txt (the ‘overclocking’ BS the guy you answered to talked about). You claim the product failed and you get a replacement or refund (at least in the EU).

> The RPi foundation is located in the UK The RPi foundation has nothing to do with selling RPi devices and whether RPi Trading Ltd. is UK or EU based doesn’t matter at all. It’s the seller’s problem if my RPi stops working within 2 years, not the manufacturer’s. I get a replacement or refund from the seller (and how the seller deals with RPi Trading Ltd. regarding RMA procedures, margins or whatever I really don’t care). That’s the difference between a consumer product and some SBC I need to order from Aliexpress or Hardkernel’s online shop or whatever dubious… Read more »

> I get a replacement or refund Or repair. Usually it goes in this order of preference for the vendor for most moderately priced devices: repair, replacement, refund. The vendor can also refuse the RMA if he can prove you knowingly misused the device. For example if you touch it after taking off your pull-over and kill it by a static discharge, it’s not your fault but the manufacturer’s who forgot to put ESD chips to protect I/Os. But if the vendor can connect to it with a JTAG probe showing that you have deliberately modified some settings that were… Read more »

With an RPi? Won’t happen since how?

If you claim the thing doesn’t work, you get a refund or replacement from the seller. Since it’s a f*cking consumer product unlike the SBC ‘we’ deal with.

The manufacturer (RPi Trading Ltd.) doesn’t have to care that much. Majority of RPi bought are collecting dust anyway since average buyers have no clue what to do whit the thing after some initial excitement.

In North america, EEUU and Canada, if you buy a hardkernel product, you better buy it thru an authorized local retailer(10-30% more expensive), some of which would only give you same HK very short warranty of 4 weeks. Some others give you 3-6 months but they overcharge you (30-40% more). There’s a reason why Rpi 4 is so popular, being a commercial product.You simply get the regular price($55Usd for 4Gb version)including a 1 year return/exchange policy at most large retail places like bestbuy at no extra charge. For most, price and return policy matters, at least in this part of… Read more »

It depends — on where you bought it.

Some resellers offer a warranty but others don’t.

Yet everyone is so shy of pointing where the over clocking statement is in the warranty. What are they withholding?

Nothing, just avoiding useless trouble. If you tell people “it’s set at 1.5GHz but if you overclock it beyond 2 you lose your warranty”, it excites everyone’s curiosity and most users who weren’t even aware of this suddenly look for how to change this. And among them some run into instabilities and complain on forums. Better let only those who more or less know how to deal with that play with it than encourage those who didn’t even think about it.

> but if you overclock it beyond 2 you lose your warranty There is no such thing. You would need to set force_turbo=1 to tell ThreadX to always clock the ARM cores at the maximum and use an over_voltage setting above 6 and only then the ‘warranty bit’ inside the SoC will be permanently changed. 2 GHz are perfectly fine with over_voltage=6 or even below and no retailer ever will check the state of a fuse for the simple reason he has no clue about this stuff. My RPi 4 run with these settings: over_voltage=2 arm_freq=1850 12 over_voltage=2arm_freq=1850 (reliability testing happened… Read more »

So many down votes for asking consumer rights, what don’t they want people to know !

Rpi is a consumable, I guess that’s what tkaiser meant by consumer product. So it’s in the same category as a coffee filter or a tea bag.

But honestly I doubt it’s hard to prove that the pi failed due to abuse. After all it’s sold without a case and “ESD chips” protect exposed I/Os not traces on the PCB/feet on the chips etc.

It all depends on the policy of the seller/importer.

This case support official or any PoE HAT? No… right? ?

This utility will provide all users access to overclocking functionalities, monitoring of system resources and re-mapping of the button on the Pi Case 40. Will be hosted on GitHub, open source and free for everyone to further develop.