Strawberry4Pi is an ecosystem of hardware, firmware, and software to create home automation and IoT projects with for Raspberry Pi boards.

The project offers a pre-configured Linux operating system, a mobile app for Android and iOS, as well as two boards with four relays: Strawberry4Pi baseboard Zero for Raspberry Pi Zero (W), and Strawberry4Pi shield A/B for the larger boards such as Raspberry Pi 3 Model B+ or Model A.

A 3D printed case and a DIN rail mount are also offered as options. 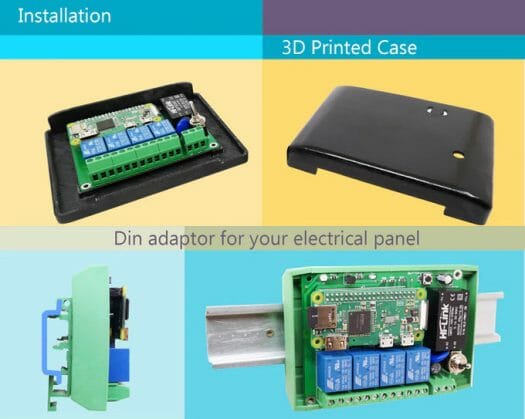 There’s no a whole lot of information about the operating system as most people won’t need to mess with it, but I suppose it’s either based on Raspbian Lite or built with the Yocto Project. We do have however more details about the mobile app that will be available on Google Play and Apple App Store.

The app basically allows you to control “Pins” (the name for relays in the app) to turn them off and on manually, enabling blinking, use PWM for motors, set timers and so on. It can also work with sensors so for example a fan is turned on only if the temperature is too high.

The board can also be controlled through Google Home using Cindy voice assistant with voice command such as “OK Google, Cindy open my garage door“.

The project has launched on Kickstarter, and already surpassed its lowly 2,349 GBP target (almost $3,000 US). Pledges start at $29 for Strawberry4Pi Shield A/B and $39 for Baseboard Zero. Full kits with a Raspberry Pi board start at about $65. Shipping adds around $6.5 worldwide, and rewards are expected to ship to backers around August 2019.

The kickstarter page seems to suggest you can control big loads like heaters with it… don’t put heaters on those crappy 10A songle relays people.

They provide diagrams for switching cycles on defined voltage and current situations that makes this 5-10A for either 120VAC/240VAC or 28VDC to a value that shows peak value for limited time and load type (from capacitive to resistive)?
http://www.circuitbasics.com/wp-content/uploads/2015/11/SRD-05VDC-SL-C-Datasheet.pdf

Talk about “over” engineering. Same relay board can be found on fleabay for $10. The whole point of an RPI Hat is to learn how to do it locally by hand and on the RPI box, not host the control in some cloud service for Google Home to sync with. Added value product again.

No Z-Wave, No ZigBee….no HA