Due to geopolitical tensions, Huawei cannot rely on Google Android operating system over the long term, and in May 2019 we reported HongMeng OS may become Huawei’s OS alternative to Android. HongMeng (鸿蒙) OS will finally be called HarmonyOS outside of China, and we recently reported Huawei was trying to attract more developers with monetary incentives to brings more apps to HMS (Huawei Mobile Services).

We now have a more clear timeline with the company’s recent release of HarmonyOS 2.0 beta that’s currently available for smart home applications, smartwatches, and head-on-displays, and will become available for smartphones in December 2020. 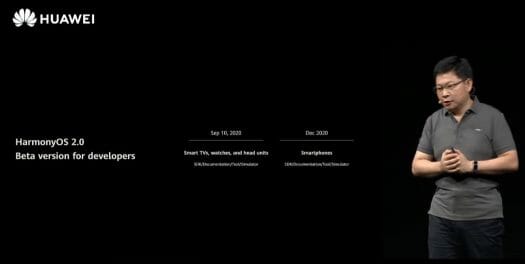 The release includes SDKs with over 13,000 APIs, documentation, tools, and simulator/emulator. OpenArk is an open-source compiler that was released last September, and Huawei DevEco is the IDE for development that works on top of Android Studio.

Huawei also introduced OpenHarmony which should be the equivalent of the Android Open Source Project (AOSP). 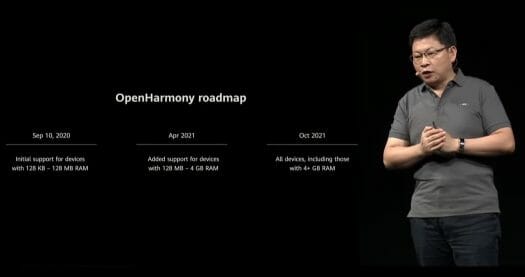 Whether you intend to develop apps for the new operating system or devices based on HarmonyOS, you’ll find resources to get started on the official website.

That means we should expect Huawei device to start shipping without Android in 2021, and no Google services meaning no Google Play, nor official YouTube, Gmail, YouTube, Google Maps, or Chrome apps. It’s not really an issue within mainland China, but in other countries, it may become more problematic although there are good alternatives, and I doubt Google can practically block Huawei devices from accessing their servers.

Myself, I’m mostly using Google Play and Gmail app, as I usually browse the web with Firefox where I also watch YouTube videos and rely on MAPS.me app whenever I need a navigation system. As a side note, my Xiaomi Mi A2 smartphone recently died (physically damaged storage), so I searched for a locally available smartphone, and I ended up buying Huawei Y9 Prime 2019 last month since it’s popular in Thailand and matches most of my specs & price requirements. The phone shipped with Android 9.0, but I got upgraded to Android 10, and so far everything works well including Google Services. We’ll see how it will go on September 15 as Google has to cut off all ties from Huawei. Will my phone eventually get an update to HarmonyOS? Probably not, since the phone would have been released for about 2 years.

Via Liliputing and Android Authority

In the US…Commie OS is DOA

Unless it comes from Russia in which case it would seemingly be welcome with open arms based upon the current love affair between the two nations.

At each new affair, including spying problems, people goes out of Facebook. Interesting people goes out from Tweeter toward Fediverse via Mastodon, due to censorship. Youtube film-makers started to go toward Fediverse via PeerTube. This will probably allow to have a more central place, and at the same time decentralized of social communication with independency from this fascist state. TikTok, is one of the most popular casual application, work perfectly and don’t spy as some investigation shown, even for NSA, Microsoft made pressure to buy it, and Trump said he will block it, if it don’t give it to Microsoft…… Read more »

When Biden is President this may become a mute point as the Dems roll back much of the damage that Forrest Chump has done and perhaps invite Huawei back into the tech fold.

Indian government will block this due to tensions on the common Himalayan “border”. One up for Korean, Taiwanese or Japanese hardware without this “Harmony”.
On the other hand India probably would like its “own” OS too.

I am only one who thought about Logitech when I saw this? I thought this is related to their Harmony series 😀