We first mentioned GigaDevice Semiconductor in 2015 for its STM32-compatible GD32 microcontroller, but last year, the company was brought back to our attention again with its GD32V RISC-V microcontroller with similar features as its GD32 Cortex-M3 model but equipped with a faster and more efficient RISC-V “Bumblebee” core. 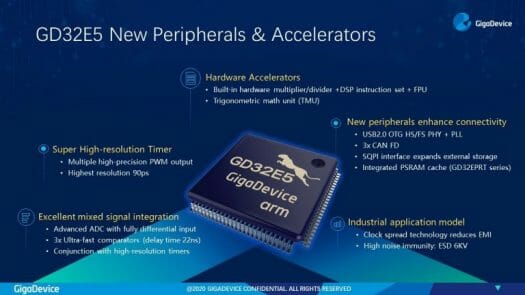 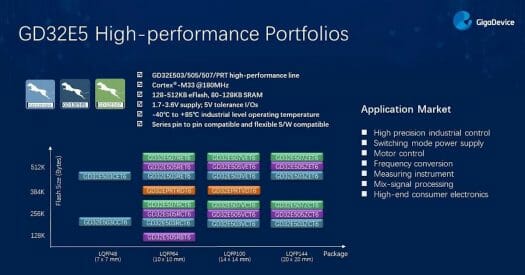 There are four product series within the GD32E5-series microcontroller family:

There are differences among the family, but it’s challenging to summarize them, so I invite you to check out the product matrix with the details for the 23 GD32E5 MCUs. Speaking about documentation, you’ll find the datasheets, user manual, development tools on the download page.

There are also GD32E5 evaluation/development boards, but I could only find those in a video from Tam Hanna. One of the boards looks similar to STM32 discovery kits, while there’s also a larger GD32E507 evaluation board with LCD, Ethernet, and access to all I/Os.

I suppose he got those two boards from one of GigaDevice’s distributors since I was unable to find the boards online, even when searching for GD32E507TZ-EVAL reference directly. Tam further explains GigaDevice MCUs are much better than other solutions for driving motors or LEDs strip, and as general-purpose microcontrollers, they are also more versatile.

You’ll find links to distributors and more details about GD32E5 microcontrollers on the product page.

It’s good to see more development in this market segment. This specific development looks good in that they’re providing data sheets and starting to behave like a traditional western semiconductor company. The days of “you have to know a guy” or “found this lying around online by luck” method of datasheet aquisition need to go away and stay away.

Looks like GD borrowed heavily from the STM32G4x specs (the details are probably different).
A big question: how good is their software support? ST, TI, and NXP have excellent software support for motor control.

BTW, looks like the main US online distributor for their MCU’s is semiconductorstore.com, which currently does not show any price information for the GD32E5 series (you can get GD32F pricing there, although it’s probably substantially more than volume pricing)

They don’t look much like the G4 family. More like the F7–at least in performance. It’s always so hard to compare peripherials with putting the datasheets next to each other and spending a few hours of quality time.

I’m curious how well support they’ll become as well. Now that STM has choked out the open arduino development project for the STM (and STM like chips), the bar to entry is a lot higher for other competing chip makers.

Let me revise what I said about performance. I think the article is in error. Looking for info of ARMv8-M, it seems it’s not 64 bit like said here, but just with the 32 bit stuff from ARMv8–which isn’t much, IIRC. The core isn’t far off the M4, either. The TSMC 40LP node it’s being made on is the lowest performing one that ARM supports as well.

Well with uCs the race for the foundry process node didn’t start yet.

Also bigger nodes my well have advantages on the overall semiconductor, apart from the raw mips of the core.

As an announcement, I expect the product won’t be available in a few months 😉