[Update November 7, 2020:  Correction for the meaning of “multi-OS support” on Arm Cortex-A78AE core]

Arm Cortex-A78 CPU core was first introduced in May 2020 with a focus on mobile devices like smartphones and was followed by Cortex-A78AE for automotive and industrial embedded applications in September.

The company has now introduced a new variant with Arm Cortex-A78C supporting up to eight cores per cluster, a larger cache up to 8MB for higher performance, and advanced security features all designed for always-on laptops and other “on-the-go” devices. 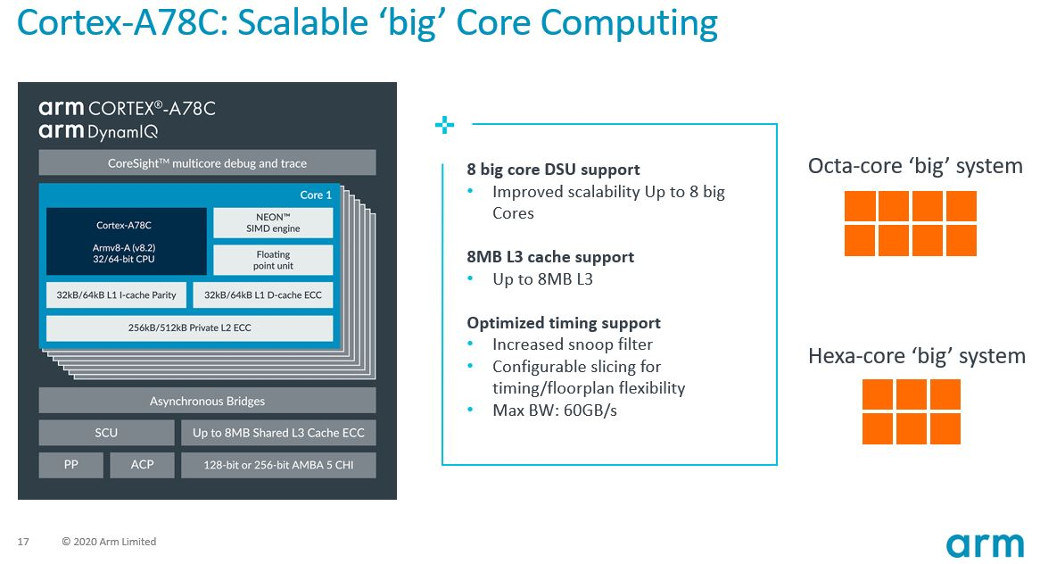 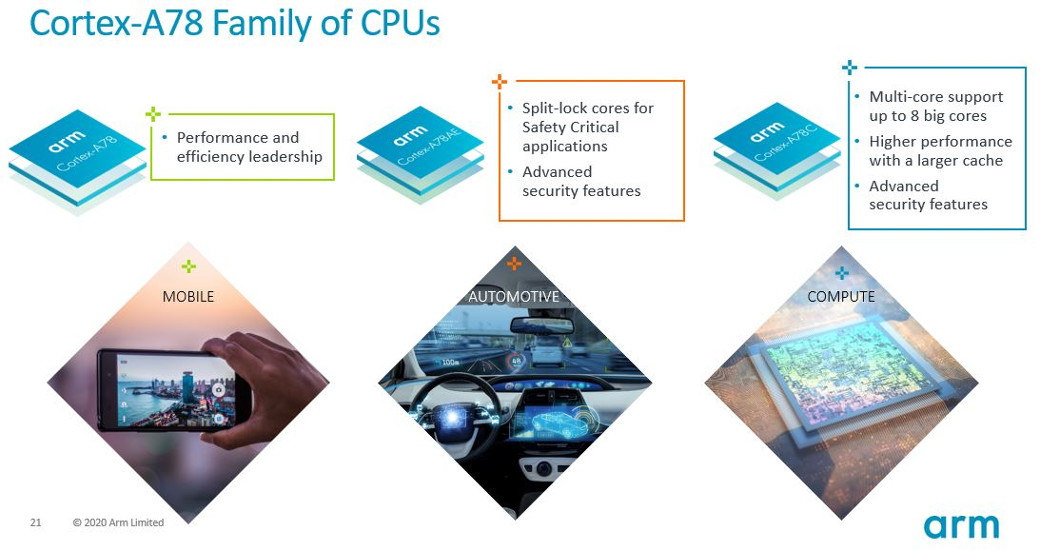 These enhanced features are ideal for enabling high performance, heavily threaded workloads, such as ‘physics’ in gaming and professional productivity applications. When combined with Mali GPUs, the 8 core configurations extend and enhance the all-day gaming capabilities. Mali-G78 provides the graphics performance and battery life improvements to support the drive for more immersive gaming experiences on-the-go for longer. Meanwhile, the L3 cache improvements empower developers to bring enhanced gaming experiences, such as AAA gaming, to next-generation devices.

[Update: Arm explains that “multi-OS support” is not about virtualization and Secure-EL2 but is a name for the following set of features: ARMv8.4-RCPC, Armv8.4 enhancements to weaker release consistency ARMv8.4-CondM, Condition flag Manipulation]

More details may be found on the announcement and developer page.

That’s great. Beyond the product, there is a strong message being delivered here: “there is demand for more than 4 powerful cores”. This could encourage certain chip makers to go further than one fast, one medium and 6 small cores.

For interactive workloads like phones, tablets, and televisions–you know 99% of all ARM processors–that mix of cores does a better job of optimizing the experience vs SoC cost.

This is a design for alternatives of the upcoming Apple designed Arm-powered laptops. It is a shame that ARM is in a responding role and not a role driving innovation.

Actually Apple would make much more sense than NVidia to acquire ARM, even though I’m not convinced it would be better for them nor the community. But *they* are making extensive use of their technology.

There is no reason for *anyone* in the ARM ecosystem to buy ARM Ltd. You can already buy a full architecture license which lets you do anything you want with ARM. nVidia and Apple already have them. They would only gain control over the future of *other* companies which *don’t* hold such licenses. The only motivation for someone inside the ecosystem to do that is to choke off competition. All this talk of ‘leading with our vision’ kind of crap is clearly just smoke. They both can and have designed their own cores with custom extinsions. They have nothing design… Read more »

Because they are being squeezed by AMD and Intel, Nvidia needs new markets and more revenue streams. Hence aRM IP buy. aRM wil be in cars, phones and iot. When did you last buy a AMD or Intel powered Smartphone.

Are you sure ? I thought it was BBC micro. Not that these would be exclusive but it’s easy to confuse those old machines 🙂

You’re both right. The ARM was originally a RISC CPU designed by Acorn (who made the BBC Micro), and ARM stood for Acorn Risc Machine. The CPU technology was then spun out into a company called ARM – which Apple owned a share in (the Apple Newton was based around an ARM processor). The ARM in the company name then stood for Advanced Risc Machines.

I knew it used to be Acorn Risc Machine, but I always thought BBC Micro was the company name and Acorn the computer, while apparently it’s the other way around 🙂

The BBC Micro was called the BBC Micro because it won contract from the BBC to be the micro for their computer literacy drive. There is a documentary called “micro men” I think about this period and you can watch on youtube from what I remember. ARM based Acorn computers were pretty expensive and I knew only one person that actually had one as a home machine[0]. In retrospect the BBC association probably killed ARM on the desktop because Acorns were “school computers”. Personally I’d like to know what the parallel universes where the Sinclair machine won turned out like..… Read more »

lets hope apple never acquires arm, or it will be the end of it, its the apple way or the highway.

I think this is targeting Microsoft’s response to ARM based Macs. The “multi-OS support” reminds me of the XBOX One. It doesn’t seem unreasonable this is meant to support Windows, “MS-Linux”, and “Marketplace” environments.

Can’t wait until they make these cpus in a power cluster of 8 cores, on cheap tv boxes.

I forecast you will have wait a minimum of five years for that to happen… If it ever happens… Low power cores are usually sufficient on TV boxes, and in five years, I suspect those will have improved as well.

For multimedia, hardware decoding is a higher requirement that sheer cpu power. For what purpose, other than driving a gui would you need a high speed core?

but.. that’s the VPU actually.

I hope these actually start turning up in some SoCs that aren’t phones. The v8 extensions like pointer authentication are interesting but not much use if they only exist in QEMU.

I don’t think A78C will show in phones at all, but only in “laptop” processors.

Yeah. I was thinking these will turn up in higher end chromebook style devices.. Which isn’t as good as super cheap SBCs but you still have some hope of actually running your own kernel etc on a chromebook.

It’s also possible that these end up like ARM1136r0/ARM1136r1 (ARMv6K architecture add-on), Cortex-A9/A9r4 (improved performance) or Cortex-A12/A17 (big.LITTLE), where later products just incorporated the updated design, while the early adopters had a slightly inferior core with little practical difference.