Sutajio Ko-usagi PTE LTD has launched some interesting hardware on Crowd Supply over the years include Novena open-source hardware Arm laptop, and Fomu FPGA USB board.

The company is now back with another project: Precursor, a mobile, open-source hardware devkit powered by not one, but two FPGA with Xilinx Spartan 7-Series FPGA, plus a super-low-power Lattice iCE40 UP5K FPGA for deep-sleep system management. The device also comes with a display, battery, and keyboard that make it looks like older Palm or Blackberry phones. 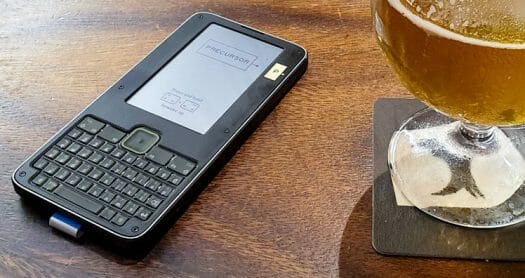 In theory, you can run anything you’d like on the FPGA core, but as you can see from the specifications, they’ve tested RISC-V soft cores on the chips.  You may wonder why a mobile device would not come with a built-in microphone, and a speaker that only good for notifications. That’s because Precursor focuses on security beyond the anti-tempering measures. Since you can only communicate by plugging a headset, it’s impossible to be spied on when the headset is not connected.

The source code, the hardware design files such as schematics and PCB layout, as well as 3D files for the enclosure can all be found on Github, and the company encourages forking the code, as well as submitting pull requests or filling bug reports in the issue tracker.

Precursor FPGA devkit has just launched on Crowd Supply with a fairly high $220,000 funding target in order to fund software development for at least one year. There were 50 early bird units at $450, but now rewards start at $512 for a fully assembled Precursor device, one “debug board” HAT, and four grams of EPO-TEK 301 in a bi-pak, for sealing the metal shield. It should be noted that if you decide to seal the shield, it will be permanent and warranty returns/exchanges are not possible on sealed devices. Shipping is free worldwide, and deliveries are expected to start on December 2, 2021, or over one year from now.

The project will be go ahead as they’ve just surpassed their $220K funding target.