“Unfortunately, there are not a plethora of Vulkan applications and games like these that we can easily test and debug on a Raspberry Pi as of today, which posed a problem. One way to work around this limitation that was suggested after my presentation at XDC was to use Zink, the OpenGL to Vulkan layer in Mesa. Using Zink, we can take existing OpenGL applications that are currently available for Raspberry Pi and use them to test our Vulkan implementation a bit more thoroughly, expanding our options for testing while we wait for the Vulkan ecosystem on Raspberry Pi 4 to grow,” says Igalia.

For that desktop OpenGL version, Zink required a few optional Vulkan 1.0 features that we were missing in V3DV like logic operations, alpha to one, VK_KHR_maintenance1. While testing these features with the relevant CTS tests, they found a bug in the alpha to one test, which is currently in review. 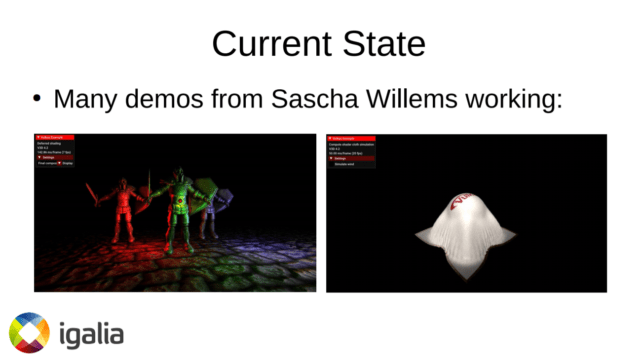 The short-term objective for Igalia will be to get all CTS tests passed to achieve the Vulkan 1.0 conformance. 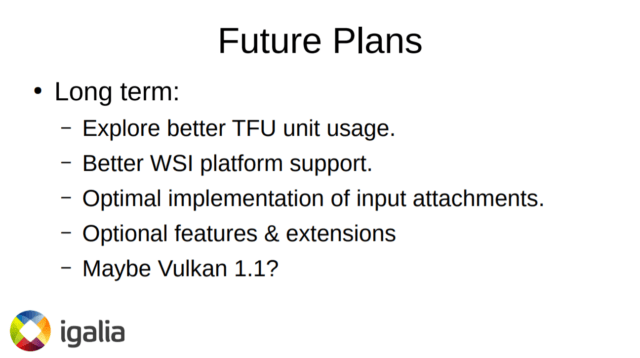 For transfer operations, the driver uses the texture unit and the bit shader. To provide improved support, the team is exploring better options as they cannot use the texture filtering unit (TFU) unit more often. Modern GPUs TMUs contain Texture Address Units (TA) and Texture Filtering Units (TF). Texture Address Units map texels to pixels and can perform texture addressing modes. Texture Filtering Units optionally perform hardware-based texture filtering. Another plan is to improve the performance on the Windows systems (WSI) as due to higher dimensions there are still some issues. 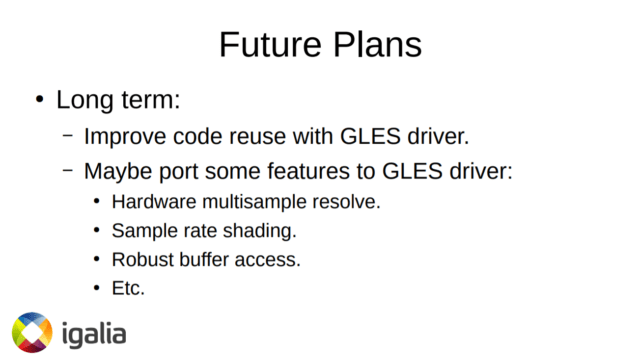 For the long-term objective, they are thinking about improving the reuse of the OpenGL driver because Vulkan drivers use pieces that are already being used by GL drivers. But for some features that are similar but not exactly the same, but can be worked on. Also, in the long term, one of the most important things is doing more real-world testing.

Going forward, Igalia expects to use Zink to test more applications and hopefully identify driver bugs that will help them make V3DV better.

Source: All the images were taken from the Open Source Summit and Igalia.

Great news. I wonder how Vulkan performs compared to regular OpenGL on the raspberry pi 4?

A Vulkan application should run better with Vulkan than OpenGL, but i dont know about the performance right now with Vulkan on Pi4 because they should be first focusing on making a driver that pass all tests and then focus on performance

Wow, once they nail this, you could honestly use the raspi as the basis for a gaming console. Obviously not super powerful, but in the rough range of the apple TV, and they’re promoting apple arcade on that. Very cool!

yeah, we are also trying to get dxvk to work(box86). but it’s too unmature for now. you should make a post on box86.