First released in 1987 by Acorn Computer Ltd, RISC OS was the first operating system designed to run on ARM processors, and specifically on the company’s Archimedes personal computer.

I don’t think I had ever heard about the operating systems until it was ported to the Raspberry Pi SBC by RISC OS Open Ltd (aka ROOL) who manage the publication of RISC OS source code. But there’s also a separate project called RISC OS Cloverleaf which aims to further develop the open-source operating systems, and just launched a Kickstarter campaign to fund software development, and they also offer two mini PCs running RISC OS Cloverleaf with namely Cloverleaf Puma powered by a  Rock Pi 4B SBC, and Cloverleaf Kitten featuring a Raspberry Pi 4 board. 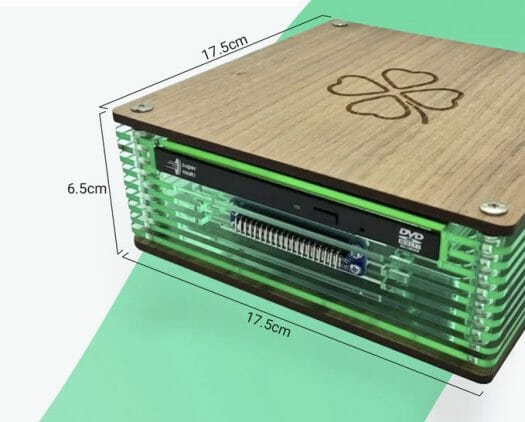 There also offer a Rockchip RK3399 laptop with 4GB RAM and 128GB eMMC, plus 128GB MVMe SSD, as well as an All-in-one PC with a 24-inch display, but the focus is really on the software side, and hardware is used to raise funds for software development. 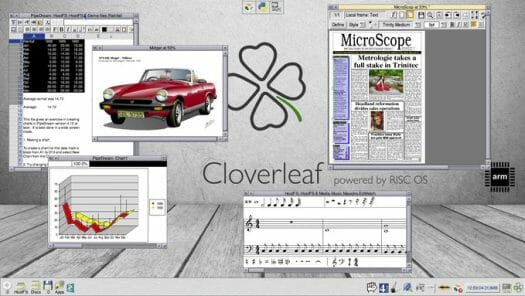 RISC OS has a rather retro look and comes with typical programs you’d expect from a desktop OS including Impression desktop publishing software, Pipedream or Fireworkz word processor and spreadsheet, ChatCube messenger with Telegram, some retro games, the GNU GCC toolchain, support for various programming languages including BBC BASIC, Python 2/3, Lua, and more.

Since I had seen RISC OS before, I asked about the difference between RISC OS Cloverleaf and the version maintained by ROOL in  the Facebook Group, and Stefan Froehling, the person behind the project,  replied the following:

The project is looking to raise 50,000 Euros with donations (29 Euros) to download the software, RISC OS T-shirts (19 Euros), and the hardware platforms mentioned above that all ship with a free T-shirt. Cloverleaf Kitten 128 is offered for 299 Euros, Cloverleaf Puma goes for 399 or 499 Euros depending on storage configuration, the laptop for 499 Euros, and the AIO PC for 899 Euros. Shipping adds 15 Euros to Germany, and 20 Euros to the rest of the world. Rewards are expected to ship in April 2021, but the software updates schedule goes into 2022 thanks to the funds to be raised by crowdfunding. More details may also be found on the official website.

I’m not yet dead. Anyway, GCC can compile the system, if someone really wants to. There is room for talents here, as we are not so much.

dead system: Wrong
dead comminuty: Wrong
paid DDE: right but can use GCC if you are poor

Yes, a lot of crowdfunding is really just slick marketing and repackaging in an effort to rip off unsophisticated geeks.

Keep everything exactly as described only replace RISC OS with Ubuntu. Is it still worth $350? Most geeks would say no. You can get the same for way less.

Bottom line — you’re really buying a copy of RISC OS for $250. Is it worth it? Most geeks would say no.

RISC OS might not be the right choice for everyone (yet) but if you want an easy to use GUI and direct programming access to your computer than it is worth it.

The point is not to run UBUNTU but RISC OS as it is better from the handling.Linux is for computer hackers and RISC OS for normal computer users. Our CLoverleaf RISC OS project is to support the development of RISC OS and not to sell Acrylic or SBC boards. EXAMPLE. Linux: Tell your mother to hack around, update, install, compile to get a new program installed that takes 6 hours and only if you have a friend who advice you waht needs to be done. RISC OS: You copy the program to the place on the SD card or harddisc… Read more »

The noughties want their DVD player back.