There are so many products and projects based on Raspberry Pi that it’s difficult to keep track, and many are often not that interesting, not because they are not useful, but instead because it just feels we’ve seen those before. But this week I’ve come accross three projects that looks to be newsworthy including two handheld computers with a 4″ display, and one retro-gaming console with standard arcade buttons and controls similar to what is found in Pandora’s Box/Key 5S. 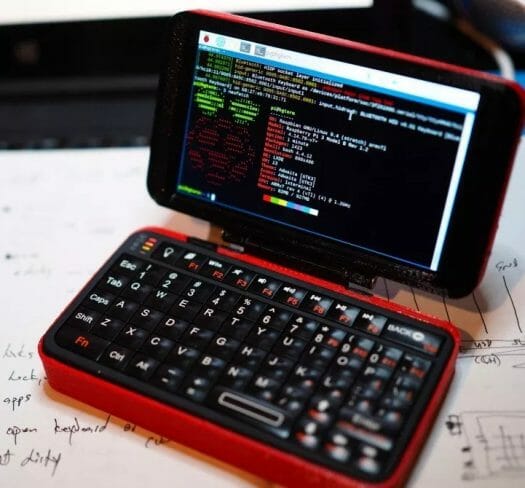 hgterm is a portable computer based on a stripped down Raspberry Pi 3 where the Ethernet port, HDMI port, and most of the USB ports have been removed. It features a 4″ touchscreen display, a Bluetooth keyboard all housed in a 3D printed case.

It’s not actually a product that you can buy (yet), but a project made by Igor Brkić which you can reproduce by following the introduction on his website. The short video below should hgterm used for Arduino programming thanks to the expose I/O on the side of the display. 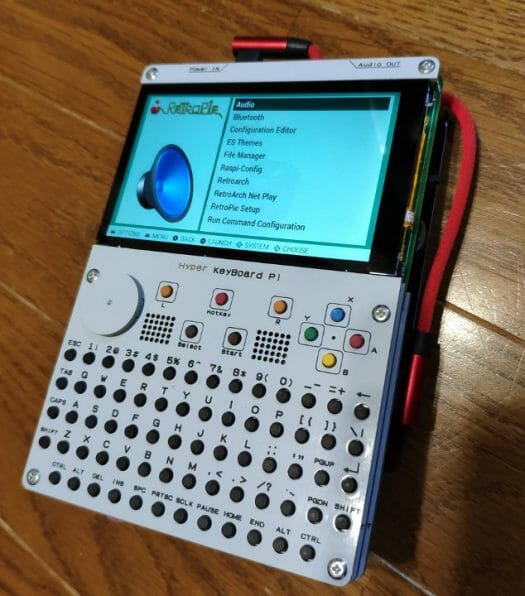 Hyper Keyboard Pi is also a 4″ handheld computer based on Raspberry Pi 3 model B, but it’s not designed as a mini laptop, but rather a game console with a flat keyboard and gaming keys.

It’s also a DIY project, but provided you live in Japan you won’t need a 3D printer since you can purchase the kit for 6,980 JPY (~$64) to which you’ll need to add Pimoroni Hyperpixel 4.0 touchscreen display ($45), Raspberry Pi 3 Model B ($35+), battery, USB cables, and other accessories included in the instrustructions.

Other have made their own 3D printer case which IMHO looks better than the kit for sale, and I could not find much information in the way of software, except for Hyperpixel 4.0 drivers, and a short video demo showing Hyper Keyboard Pi running RetroPie. 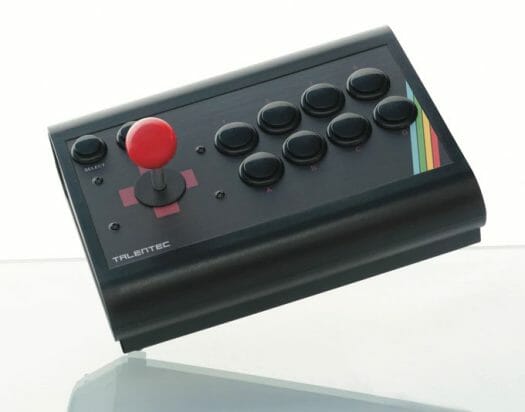 RasPi arcade stick comes with a arcade joystick and buttons, and includes a Raspberry Pi 3 model B+ board. It can be used as a standard arcade stick while connected over USB to your computer, but you can play games and watch videos directly on the stick connected to a TV by inserting a micro SD card with Retropie, Recalbox, Batocera, Lakka, Kodi, Pi MusicBox other other firmware compatible with Raspberry Pi boards. The video below also shows multiplater mode when connecting two RasPi arcade sticks together.

RasPi has launched on Kickstarter a few days ago, but you must pay attention if you are going to pledge as the campaign offers both  TALENTEC arcade sticks (designed to be connected to other hardware over USB) AND RasPi arcade sticks with or without a Raspberry Pi 3 model B+ board. TALENTEC arcade stick starts at 59 Euros, while RasPi arcade stick goes for 99 Euros without RPi, and 124 Euros and up for a complete system including Raspberry Pi 3 model B+. Rewards are expected to ship on July to September 2019 depending on selected perk.

Via Hackaday, Liliputing, and Geeky Gadgets