We’ve previously reported that the Vulkan 1.0 conformant V3DV driver for Raspberry Pi 4 and other Broadcom BCM2711 based platforms was part of Mesa 20.3 open-source graphics framework. But at the time, it was still under development.

The good news is that Mesa 20.3 has now been released, and there’s much more than Raspberry Pi 4 support, as Collabora informed us the release also included Arm Mali Bifrost GPU support via the open-source Panfrost driver. 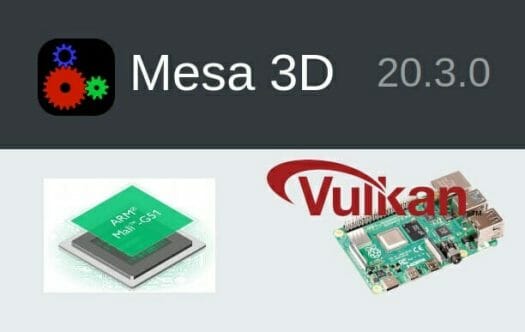 The latter was made possible thanks to the work by Alyssa Rosenzweig and Boris Brezillon, with Alyssa going into details in a recent blog post on Collabora. More work is still needed with better performance and OpenGL 3.1 being the focus in the months ahead.

But there were also many other changes in Mesa 20.3 as reported by Phoronix:

It should be noted that Mesa 20.3.0 is a new development release, and for people who are mostly concerned with stability and reliability, the developers recommend to stick with a previous release or wait for Mesa 20.3.1 point release.

Incredible what Alyssa made possible!
Have to go and test it on my TV box.