“There’s a HAT for that” they say, or something close to it… We’ve covered many HAT expansion for Raspberry Pi boards over the years, but so far, I don’t think we’ve seen any HAT with a fingerprint sensor, probable because tiny USB fingerprint readers are a thing.

But if you’d like a HAT with a built-in fingerprint sensor, the guys at SB Components have you covered with PiFinger HAT equipped with a 2D capacitive fingerprint sensor and a small display. The expansion board is also powered by a Nuvoton Cortex-M23 MCU with Arm TrustZone support and on-chip crypto-accelerator. 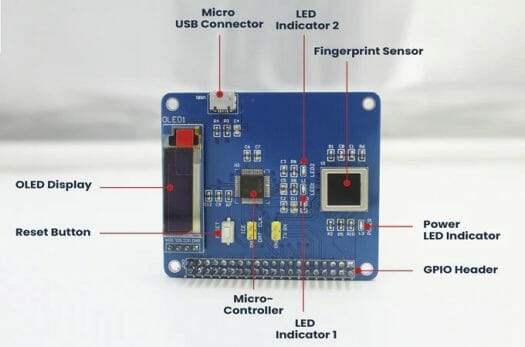 The company provides software that lets you compare and register up to 24 fingerprints, and supported functions include fingerprint storage, scan, comparison (1:1), and search (1:N). SB Components mentions the board is open-source, and appears to be offering an API and GUI for the PiFinger HAT expansion board, but so far no resources have been published.

The company claims the SPI connection between the MCU and fingerprint sensor enables 2MB/s image capture speed for faster fingerprints recognition. The solution can be used to create attendance systems, to lock or lock your Raspberry Pi, or authenticating doors.

A Kickstarter campaign is currently running to fund PiFinger mass-production. Rewards start at $61 US for the expansion board only, but  you can also purchase bundles with Raspberry Pi 4 and/or a 5-inch LCD display. SB Components expect to ship the rewards to backers in February 2021. It should be noted the tiny USB fingerprint readers I linked too in the introduction costs between $20 to $40, but I could not find project based on those and I’m not sure how well they perform. Instead, previous DIY Raspberry Pi fingerprint reader projects used a serial fingerprint scanner connected to a USB to TTL board or Grove board.