Pi boards keep on coming… As soon as I finished writing about Roseapple Pi board, yet another one popped out on my twitter feed… But that one is of a different kind, as it won’t run Linux, but instead the board is powered by an Atmel SAMD21 Cortex M0+ micro-controller, and can support lots of electric motors including up to 11 micro servos and 8 DC motors – or 4 stepper motors – simultaneously. 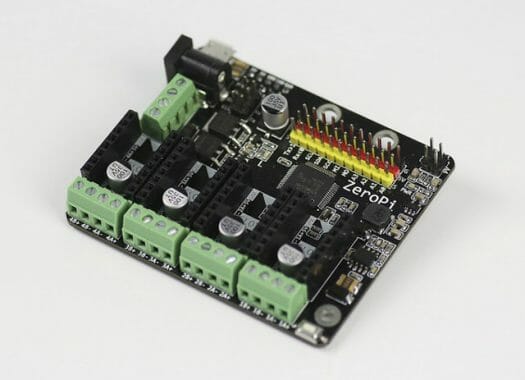 The board also features M4 holes to make it compatible with Makeblock parts, as well as one M3 hole to attach it to a Raspberry Pi board. 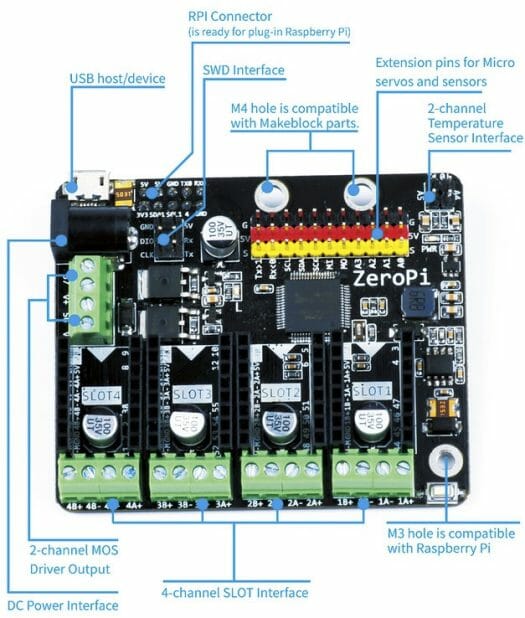 The board is compatible with Arduino Zero, and can easily be programmed with the Arduino IDE 1.6.5 or greater. It can also be used as an HAT Board for Raspberry Pi to add more powerful features such as a web server or camera for monitoring your project. and is suitable for 3D printers, CNC machines, and various types of robots. Marlin and Repetier firmwares for 3D Printer, FreeRTOS, and sample code for motor control & CNC, as well as some documentation are already available on Github.

The presentation video gives a good overview of what is possible with the board.

The project has recently launched on Kickstarter where the company aimed to raise a mere $5,000, but so far they’ve well gone pass the target having raised $15,000. Rewards start at $19 (Early bird) for the ZeroPi board, but you’d need to provide your own micro servos or drivers + motors, so if you want to get started quickly and easily, you’ll probably want a kit with motors and drivers and that starts at $123 with one ZeroPi board, one Debugger, two DC motor drivers, four DC motors, two stepper motor drivers and two stepper motors. Free shipping is included to all countries, and delivery is scheduled for December 2015.

Based on the same chip, see also this board:

Too bad this is on Tindie from the US, export taxes usually kill this product.

Hi,
Where can I buy the zeropi.

@Marcellus
I can see they’ve just started to ship ZeroPi to backers.
You should eventually be able to purchase it via http://www.makeblock.cc/search.php?search_query=zeropi, but as you can see it’s not listed. if you really to know when it will be available them contact MakeBlock via their website or Kickstarter campaign.

Where can I buy the zeropi？