We’ve seen several tiny “omu” USB boards that are the size of a USB connector in the past, starting with Tomu based on Silabs EFM32 Arm-Cortex-M0+ MCU, then Fomu enabling Python programming and RISC-V softcore on a Lattice ICE40 FPGA, and finally Somu FIDO2 security key.

There’s now the new Qomu board based on Quicklogic EOS S3 Cortex-M4F MCU with embedded FPGA. Just like its predecessor, the board almost completely fits in a USB connector except for the touch pads, and also happens to be programmable with Symbiflow that dubs itself as the “GCC of FPGAs”, as well as other open-source tools. 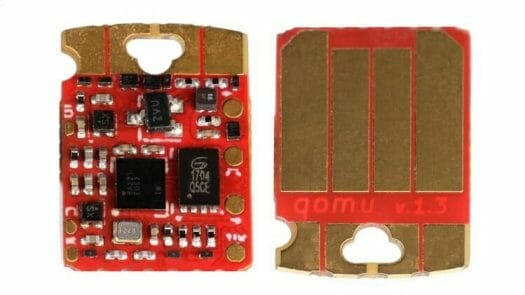 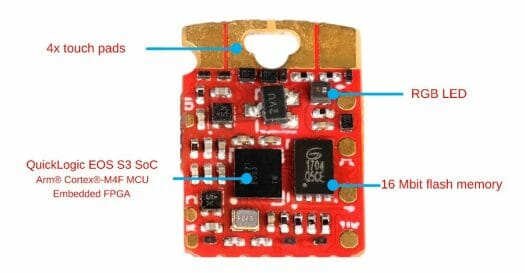 Qomu board will ship with an injection-molded case and is entirely open-source hardware with the KiCad hardware design files and Gerber files available on Github, and upstream Zephyr or FreeRTOS open-source real-time operating systems running on the Cortex-M4F core of EOS S3 SoC.

As mentioned in the introduction, even the FPGA design tools used with Qomu are open-source, including SymbiFlow tools for synthesis, place and route, and bitstream generation, as well as nMigen support for a Python-to-FPGA design, and full device emulation with Renode. 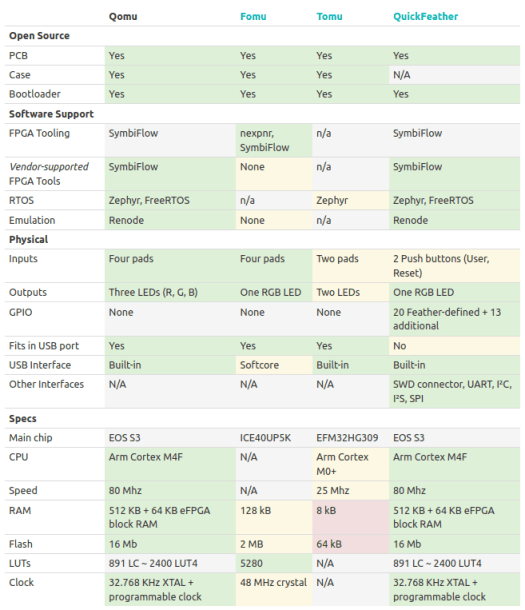 The comparison table above shows the difference between Qomu, Tomu, and Fomu, as well as Quicklogic’s earlier QuickFeather board following Adafruit Feather form factor that offers more flexibility including I/Os thanks to its larger size.

Qomu has just launched on Crowd Supply with a symbolic $1 funding target. There’s only one reward: Qomu board with enclosure for $40. Shipping adds $8 to the US, and $16 to the rest of the world regardless of the quantity purchased. Shipping is scheduled to start in May 2021.

What do the different colours in the table mean? I guess nothing much, else why is 16Mb green and 2MB yellow? SymbiFlow once grey once green? M bit confused 🙂

I got a capcha navigating from mewe to here. WTF is that

It’s Cloudflare “Under Attack Mode”. My website was overloaded yesterday, this helped a bit, and it will be temporary.

Not even their distribution partners have anything else than the feather in their inventory. Not a single sample can be ordered anywhere.