When I need to flash a Raspberry Pi OS image, I usually download the image from the Raspberry Pi website before flashing it to a MicroSD card with either balenaEtch or USBimager.

The Raspberry Pi Foundation released the Raspberry Pi Imager last year, but I never used it, except to try it out, because at the time, it would just flash the image to the MicroSD card like other tools, and since I’m working with SBCs from different vendors it did really not bring any benefits to me. 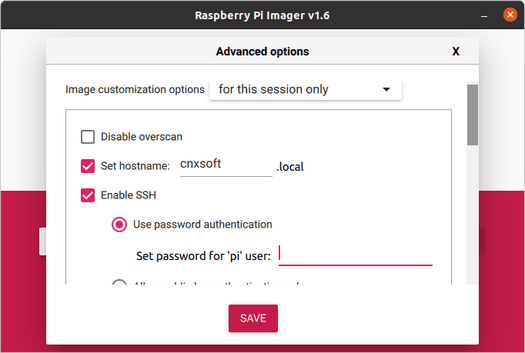 But with the v1.6 release, the Raspberry Pi tool has become more useful to advanced users, notably those who like to set up the image in a headless Pi. Before we had to flash the image, mount the MicroSD card, and go edit /boot/config.txt to enable SSH and other settings.

Now, it’s possible to do the same from Raspberry Pi Image v1.6 by pressing Ctrl+Shift+X to bring the Advanced options to configure: 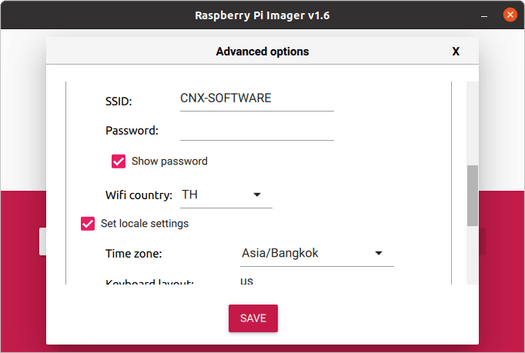 The settings can be saved for the current session only, or as defaults. If you’d like to try it out, head over the download page, unless you are running it directly from Raspberry Pi OS in which case Raspberry Pi Imager can be installed with apt:

As a side note, one commenter mentioned the advanced option did not include WiFi access point mode (aka hotspot), but thanks to Comitup project it’s possible to easily set up an access point with either Comitup package (after flashing the image, and running it), or one of Comitup images that automatically sets up an access point at boot time.

Very nice for the attention to headless. I only have one out of a flock of them with a display and only because I wanted to play with the Pi 400.