Gerard (aka halfmarble) has released hm-panelizer open-source software allowing for a panelization of PCBs via a simple GUI interface and doubling as a Gerber file viewer.  He’s mostly tested it with PCBs designed in KiCad 6.x, but it should also work with design files from other tools.

Note that hm-panelizer is just a side project, and Gerard released it as an open-source project in hopes that it might be useful to users and the community will contribute to it. The project relies on kivy cross-platform library, pygame and pycairo libraries, as well as pcb-tools and pcb-tools-extension projects. 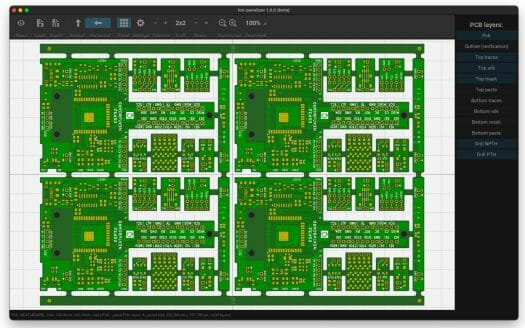 There are some requirements for the utility to work on with your PCB :

The tool can only add mouse-bites to perfectly straight lines, only horizontal mouse-bites are supported, and the horizontal/vertical feature is currently problematic with most PCB houses, so he recommends doing the rotation in the PCB app, and only using hm-panelizer for layout and mouse-bites at this time.

If you’re interested you can check out the project, released under an MIT license, on Github. Note that it’s not the first panelizer tool that works with KiCad, as the kicad-panelizer project was released a few years ago, and has been updated for compatibility with KiCad 6.x. It’s however a command-line tool (Python script), while hm-panelizer offers a graphical user interface.

There is also KiKit, which seems to be much more mature:
https://github.com/yaqwsx/KiKit