It took around 3.5 years of development to release KiCad 6.0.0 open-source EDA suite, as the previous major release, KiCad 5.0.0, was introduced in July 2018.

KiCad 6.0.0 comes with a refreshed user interface that’s supposed to reduce the barriers of entry for new users and users switching from other design software with notably the schematic and PCB editors now feeling like being from the same program instead of completely different tools. 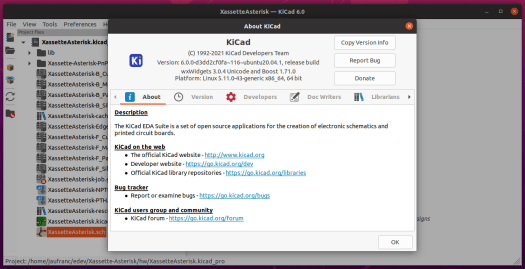 As noted by the developers, it’s difficult to summarize all the changes because of the thousands of updates made between KiCad 5 and KiCad 6, but here are some highlights:

KiCad 6.0 will also be the last release to support XSLT BOM generation scripts and the SWIG Python API, as those will be deprecated in KiCad 7.0. The developers recommend people migrate to Python BOM scripts and a new Python API will replace the SWIG API. Additional changes can be found in the official announcement.

KiCad 6.0.0 is available for download now for Windows, macOS, Linux, and FreeBSD. I could install it on Ubuntu 20.04 in a few minutes with the program and associated recommended packages taking 5,694 MB of additional disk space on my drive according to apt:

Cool will update once back to work in January

There hasn’t been a bug in filled copper ever.
It was a design decision to not allow unconnected islands.
But since so many people have whined and complained, they reticently relented and allow you to make discharge risks, and emi bombs…