Once upon a time, people tried to avoid STM32 fakes and clones, but in a world where companies are allegedly purchasing washing machines to extract a few unavailable components, people have started to look for alternatives, and last week I wrote about the Geehy APM32 family of STM32 clones.

But I had never heard about Flashchip Microelectronics FCM32 microcontrollers, and they are not that easy to find in search engines, so they must be relatively new. The company appears to make both FCM32F clones and FCM32H derivatives with no direct equivalent STM32 part numbers, a higher clock frequency, and faster flash.

For example, the FCMF030F4P6 will match the specifications of STMF030F4P6 as far as I can tell. The good news is that the datasheet is available in both Chinese and English.

The FCM32H030C8T6 appears to be a higher performance version of STM32F030C8T8 / FCM32F030C8T8 with a 100 MHz frequency, and support for “Flash Turbo” which means the “FLASH has an acceleration module, which greatly improves the MCU program execution performance and also improves the energy consumption ratio“.

The FCM32F103 family offers “clones” of STM32F103 microcontrollers but with a twist: the Arm Cortex-M3 core is replaced by an Arm Cortex-M4 core, still clocked at 72 MHz. None of the documentation is offered in English though.

The FCM32H3103 family is similar to the FCM32F103 microcontrollers but increases the frequency to 96 Mhz, implements Flash Turbo, and comes with 32KB SRAM instead of just 20KB. The other parameters appear identical. There are also other Arm Cortex-M0 and Cortex-M4 FCM32 microcontrollers, but you get the idea and can find the full details on the company’s website. 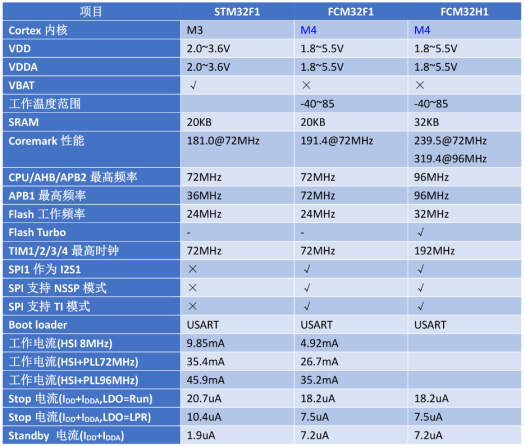 The comparison table above shows the FCM32 parts are not exactly the same as STM32 parts with a wider voltage range, different power consumption, lack of support for VBAT, and so on. You can check the migration guide, sadly only available in Chinese, to have a better understanding of what may have to be changed when switching from STM32F1 to FCM32F1 or FCM32H1 parts. 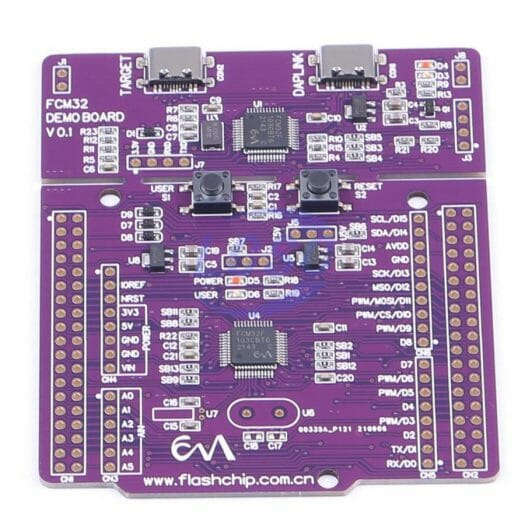 It would be no fun if the FCM32 microcontrollers were not up for sale outside of China, and luckily, LCSC offers some FCM32F microcontrollers with the sample price ranging from $1.23 to $3.61 and lower in larger quantities. There are also two development boards on offer, one with FCM32F103CBT6 (LQFP48) and the other with FCM32F103RBT6 (LQFP64) both with 128KB flash and 20KB SRAM, and going for $7.68.

Hi Jean Luc
What about researching an overview over the non drop in replacements and their availability situation?
I.e. NXP, Michrochip, Nordic, TI, etc. etc.

Sometimes using obscure or non obscure Chinese semiconductors is less of an option than for us hobbyists.