If the Raspberry Pi Pico’s 2MB of QSPI flash is not quite sufficient for your needs, and you’d not quite a fan of micro USB ports, the WeAct RP2040 “clone” comes with up to 16MB flash and a USB Type-C port for power and programming.

Another improvement is the addition of a reset button, which can be convenient for flashing UF2 firmware, and the pinout remains mostly the same. The price is not quite as low as the original Raspberry Pi Pico, but the board sells for an affordable $5.99 with 2MB flash, while the 16MB flash variant goes for $8.99 with shipping included in both cases. 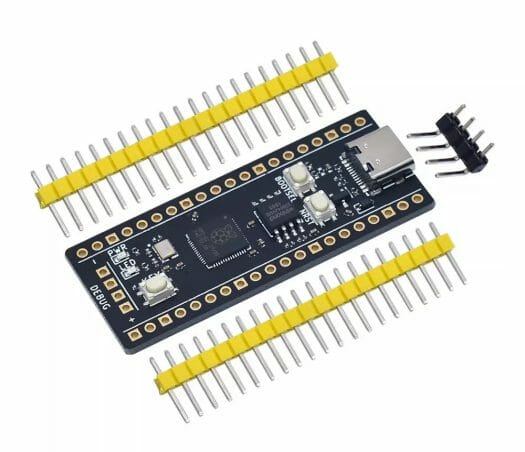 The board should remain compatible with Raspberry Pi Pico MicroPython and C/C++ SDKs, as well as community-supported firmware. But there are some other small differences as well, as the castellated holes are gone, so if you had a baseboard design that used those, it won’t work with the WeAct RP2040, and the DEBUG header adds a 3.3V pin, and the pin arrangement is also different. While the left header (pin 1 to 20) pinout is exactly the same, there are some changes to the right header.

The “RUN” signal (pin 30) and 3.3V out (pin 36) are gone, with the plus side being that it makes place for two extra GPIOs (GP24 and GP29), but obviously, this could come at the cost of compatibility with firmware or baseboards depending on whether the pins 30 to 36 are used.

The board has been released at the end of last year, and some users already reported their experience on Raspberry Pi forums, and some claims the 2MB version is even cheaper to get than the Raspberry Pi Pico once VAT and shipping are taken into account. While I found it on Banggood first, WeAct is also selling the board for $2.43 to $5.62 on Aliexpress, but that does not include shipping ($3.23 extra to the US).

I kind of like the vcc-gnd rp2040 board’s approach to the pinout a bit more. They keep the 3V3_OUT pin where it is on the official board and instead turn the 3V3_EN pin into the GPIO pin, and move the ADC_VREF inwards as an optional pin and instead replace pin 35 with GP29/ADC3, leaving RUN in place.
It’s also available on aliexpress with a 16MB flash chip, but I don’t know if it comes out more expensive or cheaper with shipping.

What bugs me is that not even one RP2040 board gives you control over VCC-IO to let you seamlessly connect it to 2.5v or 1.8v I/O, such as FPGA JTAG lines.
All boards just short VCC-IO to 3.3v

Adafruit and others also have a bunch of boards with 8MB of SPI and USB-C, if that matters. I don’t know of one with 16MB but I think I’ve heard of some interfaces (SPI maybe) from RP2040 boards to SDXC cards. It’s not so easy to see applications where 8MB doesn’t suffice but 16MB does. It’s not that 8MB should be enough for everyone (/gates), but that if you need more, you probably want gigabytes.

I’m not sure if this article is for some new board but on Aliexpress those boards with 16MB and USB type-C port are sold for less than $6 (incl. 20% VAT and shipping) at least since 3-4 weeks as I received mine for $3.50 (4MB version) a week ago.