Pixel Pump is an open-source hardware vacuum pump that should be easier to use than a pair of tweezers to pick and place SMT components, and suitable for prototypes and small production runs.

The system comes with a pen with five exchangeable stainless-steel nozzles to match the size of components, a foot pedal, and several tactile silicone buttons with RGB backlighting to control the unit. 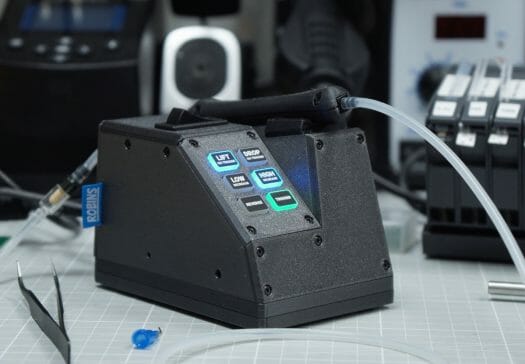 The button on the unit (customized parts bought from Alibaba) allows you to change operation modes, switch between high- and low-power settings, or activate reverse mode to clean your nozzle. It’s also possible to configure vacuum power and LED brightness with the buttons. The foot pedal is used to control the vacuum pump to pick up and release the components. A serviceable air filter is also integrated into the design to protect the vacuum pump and valves from debris.

Robin Reiter, Pixel Pump’s designer, explains it can actually be faster than an automated pick-and-place machine for smaller batch sizes, especially when combined with custom-designed SMD magazines. Those magazines are injection-molded containers for SMD tapes with a spring-loaded mechanism, and eight of them can be stored in a magazine rail for convenience.

If you want to further boost your productivity you could add an additional pedal working with the interactive HTML BOM generation plugin for KiCad to scroll through the BoM after you’ve placed specific components. That would mean the left pedal controls the pump, and the right pedal the HTML table. It’s best to see everything in action to better understand how well this works, and how it could save you time.

We’ve talked about the Pixel Pump being open-source, and Robin says “our source code, STL files, and schematics will be publicly available on GitHub once the campaign has gone live”.  But there’s limited information on Hackaday.io at this time, however, I could find the main board design files (based on Raspberry Pi RP2040 MCU) and MicroPython firmware on Github, but not the 3D files for the enclosure yet.

The Pixel Pump has recently launched on Crowd Supply with a $32,000 funding target. Rewards start at $449 for the Pixel Pump only, but you may want to add an 8-magazine pack ($36), an SMD-magazine rail ($36), and a second pedal ($55) to make the best use of the tool. Shipping adds $8 to the US, and $18 to the rest of the world, and backers should expect their perks to ship by mid-January 2023 if everything does according to plans.

I could not get the embedded video to play, I had to go to hackaday to watch it.

Now if only someone could design a cheap 3D printer to pick, place and solder / glue parts.

What kind of device are you using? Desktop or Mobile? Which OS and browser?

There are already automated pick-and-place machines, but the Pixel Pump is for manual operation.

However same browser on my Motorola Smartphone and video plays fine!

So thinking is fault due to setting or app on my TV box, unless someone else has issues too?

Are the Aliexpress vacuum handheld pick n place a waste of time then?

OK. I had no idea Samsung had made its own web browser. It’s quite possible Crowd Supply did not test the Samsung browser in a TV box for their embedded videos.

The items on Aliexpress are much simpler designs. Not sure it would work with all components, and there does not seem to be any pedal for additional control.

I’m currently using something similar to the AliExpress devices. You control suction with your finger via a small hole in the pen. My experience is these work quite well, certainly a major improvement to using tweezers (like I previously did). The Pixel Pump would be a nice step up, with a more powerful suction (I guess), and the foot peddle control. All in a nice unit for your workbench. But, I’m also stuck on the relatively high price.

Well… I’m still thinking about the Pixel Pump. At the moment I think I’m likely to end up backing the campaign. Yes, it is relatively pricey (when compared to my existing cheap pump solution), but since vacuum pumps work really well with manual SMD placement, and the Pixel Pump looks like a really well evolved and well implemented solution, I’ll probably pull the trigger. Since I already have experience with a cheaper pump solution, I at least know that the Pixel Pump will nicely solve the remaining niggles I have with my current solution (and he should get some reward… Read more »

Cool idea! What kind of pump do you have in this thing?