The microcontroller runs at up to 97.5 MHz, features 512KB RAM and up to 1920 KB flash, operates at up to 125°C, consumes as little as 2.6 μA in deep sleep mode, and can offer a range of up to 3 km when used in combination with the new EFF01x front-end module delivering up to +30 dBm output power.

Silicon Labs provide a complete Wi-SUN stack with IPv6, 6LoWPAN, security, physical drivers, as well as CoAP libraries and sample applications (meter/collector) in order to speed the time-to-market for their customers.

The company says the FG25 SoC can be used in Border routers (BR), Router nodes, and Leaf nodes in Wi-SUN Field Area Networks, and supports the new Wi-SUN FAN 1.1 standard that enables faster data rates of up to 2.4 Mbps (vs 300 Kbps for Wi-SUN FAN 1.0) and support for battery-operated “sleepy” nodes. 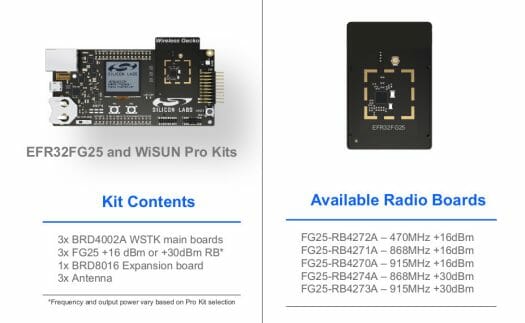 Silicon Labs can provide EFR32FG25 and WiSUN Pro kits that can be used for the development of end nodes and border routers, as well as radio boards at various ISM frequencies from 470 MHz to 915 MHz to meet the legal requirements of different countries.

Silicon Labs FG25 and EFF01 are currently sampling with customers, and are expected to become more broadly available in Q4 2022 and Q2 2023 respectively. More details may be found on the product page, a blog post, and a press release that also addresses other announcements such as Matter development solutions, the Silicon Labs Pro Kit for Amazon Sidewalk, and the company’s first WiFi 6 (and BLE) SoC: the SiWx917. We’ll cover one or more of those in detail in upcoming posts.