Wi-SUN is a standard (IEEE 802.15.4g) managed by the Wi-SUN Alliance and designed for Smart Cities, Smart Agriculture, and other large scale IoT deployments with a large number of devices thanks to the use of IPv6 mesh networking.

The organization was founded in 2011 to “support the worldwide development of Wireless Communications Networks for Utilities, Smart Cities and IoT”, but due to the niche nature of target applications, it does not get that much press coverage and was only recently brought to my attention. 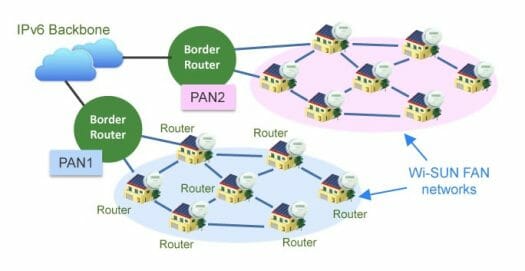 Wi-SUN FAN (Field Area Network) is the latest protocol managed by the Wi-SUN Alliance with over 95 million units shipped worldwide (as of 2019) and each mesh network can communicate with the IPv6 backbone (aka the cloud) through border routers.

More specifically, Wi-SUN FAN devices can be designed for frequent (from 10-second intervals) low-latency communication, drawing less than 2μA when resting, around 8mA when listening and less than 14mA at +10dBm when sending, while LoRaWAN devices are usually designed for infrequent communication (from 128-second intervals), drawing 2μA at rest, but 50% more than Wi-SUN FAN when listening (12mA). NB-IoT devices are also designed for infrequent communications, but with much higher power consumption as the peak current can go as high as 120-300mA and a sleep current of around 5μA. Wi-SUN also uses sub-GHz ISM frequencies like LoRa, as well as the 2.45 GHz ISM band.

Wi-SUN FAN is also more robust as a self-forming mesh network protocol, so adding new devices to a network is easy, and if a pathway fails, the network will automatically re-route to the gateways. The standard also integrates a public-key infrastructure (PKI) and IPv6 features for security, and while there are ways to do this in LoRaWAN and NB-IoT, we are told it is much easier in the standards-based Wi-SUN FAN ecosystem.

I suppose this is in the context of Smart Cities only…

You’ll find more details on the Wi-SUN website and RFWireless World has some interesting information about the standard too.

Sooo.. what’s the difference between this and, say, Thread? This has nothing to do with nbiot or lora(wan), I guess it makes sense to force lock-in for an open platform (cc1352p) if you’re the one behind the protocol…

They shortly address this point in their comparison:

Unlike indoor personal area mesh networks (PAN) such as ZigBee and Thread, the Wi-SUN FAN was specifically designed for a much greater scale of endpoints that will hop over much greater distances outdoors.

It’s designed for outdoor networks, and the point-to-point range is up to 4km.

Seems like the data is cherry picked to fit your narrative. I will be blocking this site.

You’d need to contact the Wi-SUN Alliance for more details or some companies involved in the standard.