We often write about business card or credit card-sized boards, but it’s only true for 2D dimensions, as most boards are over a centimeter thick, with possibly the thinnest we’ve covered being the Khadas Edge2 SBC that’s just 7mm thick.

So Kn/vD took it upon himself to build a DIY computer that was really about the size of a credit card, and came up with the ELLO LC1 based on a Microchip PIC18 8-bit microcontroller, featuring an integrated display and keyboard, and powered by a coin-cell battery. It’s just 2mm thin. 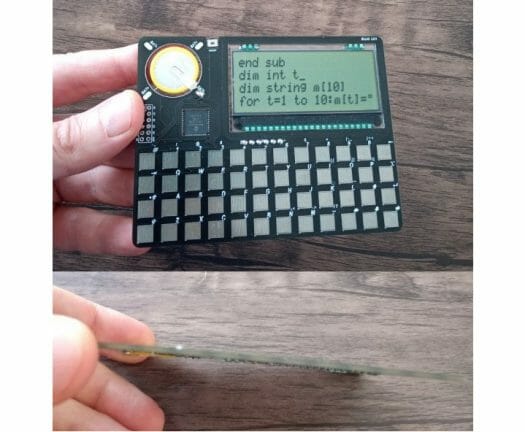 The trick was to cut out the PCB for the thicker components such as the microcontroller and the display and solder the pins on the back side of the board. Something similar was done for the battery. So there’s finally a credit card-sized computer that you can put in your wallet. It’s actually not the first, as George Hillard designed an actual business card running Linux a few years ago that was powered through a USB interface part of the PCB and slightly thicker.

Kn/vD wrote a “Bitling BASIC” interpreter that can work on microcontroller with as little as 2KB memory and includes an extended set of BASIC keywords as well as a built-in text editor and file system. The code has not been released, but it should be up on GitHub soon once some documentation has been prepared. In the meantime, you can follow the project on Hackaday.

Interesting idea, but why Microchip MCU ? Something with wireless connectivity like Nordic, Espressif, WCH … with MicroPython seems more suitable. Also, probably there are better choices for display etc.

Why anyone would use Microchip these days is a total mystery. Most of their products are out of stock everywhere with lead times till 2024. Their poor handling of keeping supply up during this time is unforgivable. When other companies like Espressif have had no problem.

The editor did a mistake, it wrote “Hackster” and is Hackaday.

On the other hand, nice board and nice post.