There are many business card-sized SBCs, like RPi 4. But George Hillard, an embedded systems engineer decided it would be interesting to build an actual business card that was a computer. His card runs Linux and houses an Allwinner F1C100s carrying an ARM9 processor with 32MB RAM and 8MB flash storage. 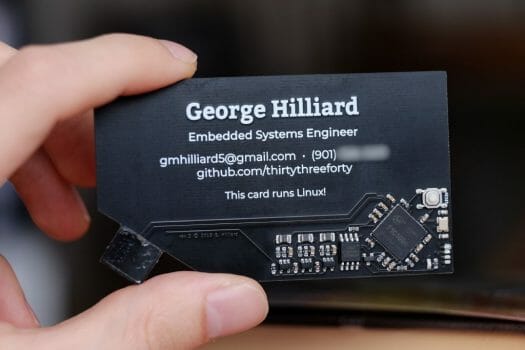 It holds some of his photos, a copy of his resume and a couple of games, which is pretty good for something like a business card. There is a USB port off one corner, and the unit can connect to a computer and boot up in about 6 seconds and shows up under USB as a flash drive.  But that piggybacked computer-attached display is really the only type of display the card can manage. 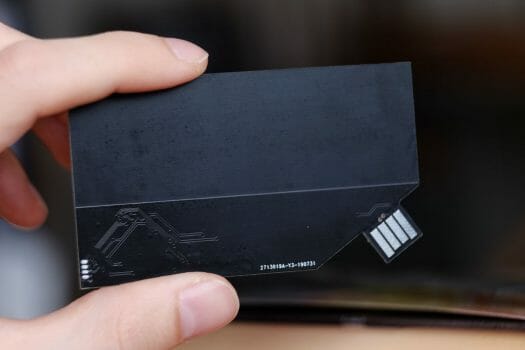 The Shell and Linux Version

The shell has the games, including a version of 2048, and a small MicroPython interpreter. The Linux is v5.2 with extra patches, and the whole thing is hosted on the inventor’s thirtythreeforty GitHub page.

The processor is an ultra low-priced Allwinner F1C100s, that runs the SoC which includes embedded RAM and CPU.  There is no connectivity or heavyweight storage options and the choice of basic components was mandated by the need for absolute cheapness.

The USB port is directly connected to the Linux USB Gadget Framework, which allows for use through USB to a computer.

The entire card costs $3.00 USD and although this is a more than the average cost of a business card,  for a business card that runs Linux, it’s an absolute steal.

Be aware that Georges’ time to make each Linux capable business card is “free” in the breakdown above, and each computer is hand made and is time-intensive.

I’m not sure if a business card bragging about running Linux is so great when the majority of that work comes from someone else. You might as well ship their resume on it.

Well, to be honest he advertises his ability to design such an embedded system aronud Linux, nothing more. Everyone using Linux relies on someone else’s work, and even more generally in CS we all rely on standards created by someone else long ago, so there’s nothing specific to what this guy did.

What I was getting at is that the Linux part isn’t the impressive bit. Putting this together for $3 is impressive. Personally I would have made that the main point. When I saw “It runs Linux” I was expecting to go to his github and see significant amounts of commits to port Linux to the F1C100s but instead saw that Icenowy had done the work for yet another weird allwinner chip.

Yeah, this chip has had a linux port for quite a while and is used in a lot of devices–bitboy, etc. Want an impressive resume? Port linux to a new processor like Icenowy did. This should be her business card.

>linux port for quite a while and is used in a lot of devices–bitboy, etc. I didn’t know about the bitboy. I was looking for one of these cheap games machines that was ARM and not MIPS. If only it was Cortex A :(. >Want an impressive resume? I wonder how much a business card like this or a resume with it as an item would really go. In my experience this stuff goes as far as HR where they do some keyword checking where it’ll go in the bin if you only put Linux and not the name of… Read more »

It’s not a resume in the sense that it gets mailed to HR, it’s a thing to get the attention of the technical staff and have them hand carry your resume to HR and say “we want this person”. That gets around a lot of the keyword filtering in a lot of companies.

It’s more impressive job done with U-Boot
https://github.com/thirtythreeforty/u-boot/tree/f1c100s-v2019.04
And if you ever try to get to live some ARM/AVR/FPGA with specific U-Boot will be good to show your Github repo ?

Rather than biz card, i think might be market for open Linux+memory wallet card format in general…

Having worked with this chip, yes simply getting Linux running on it is pretty impressive. This is not just “flash an SD card and forget about it” but building everything from the bootloader to the kernel image and the rootfs from scratch. I’d say that showcases your “embedded Linux skills” quite well.

The price of F1C100S is attractive, but it uses old and slow architecture. The Linux support isn’t so good … On the top of that there are issues with the Chinese ship-forwarding companies that make supplies from China very unreliable. I wouldn’t recommend to anyone to use any Chinese products.

I’m not an ARM9 fan either but you know for the same money as this your other option is a fast microcontroller. The time spent messing around getting Linux running how you want it will probably be tiny compared to all the messing around trying to get a USB gadget to work on a microcontroller well enough that it doesn’t crash just from looking at it.

That’s indeed pretty much true. Actually the fun thing is that can get something working quite nicely out of AVR chips with the V-USB software stack, albeit only at low speed. However I’m not sure it’s possible to prevent USB from disconnecting when facing long latencies accessing the flash.

No blown capacitors ever with this ?

I would not mind an arduino replacement board for 3EUR.

At least we could run OpenWRT on it.

I’ve worked on small computer based adruino boards running different Linux operating systems and they are real fun, highly recommend looking in to it, and some are a lot more customisable than others.