There are already Python editors such as Thonny, but the BBC thought those were not good enough and released a new web-based Python editor specifically designed for the micro:bit education board targeting 11 to 14 years old pupils.

The micro:bit Python editor includes drag and drop code examples, code structure & error highlighting, auto-complete feature, a simulator to test the code before uploading it to the micro:bit board, and a Quick ideas section to help pupils get started with projects. 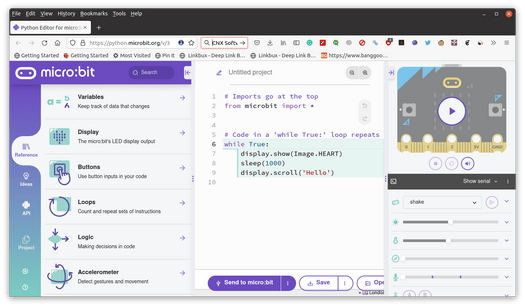 One downside of using a web-based editor is that you can’t use it offline, so you’ll need an internet connection and a web browser. One advantage is that you can save your work in the work, and restart it from any computer provided you’ve taken your BBC micro:bit board with you. The old Python editor, which is also web-based, but with fewer features, will still be available until at least September 2023. The company also says accessories are compatible with the editor provided the accessory manufacturer has provided a Python module as a .py file which you can open as a new file in the Projects section, and then import the functions from the module into your main code.

Feel free to check out the new BBC’s “V3” Python editor in your favorite web browser. More details may be found in the official announcement.

FWIW this uses webUSB which Mozilla refuse to support, so you’ll need to use a Chromium-based browser if you want to use the connecting to hardware functionality (ie you can’t use “your favorite browser” if that browser is firefox)